The new issue of Weekly Pureiboi offers us an epic dichotomy to titillate our senses: “Japanese Idols vs. World Sexy”

On the cover, the issue’s featured women are organized into two distinct groups:

The left-hand column makes sense: all four of the girls are Japanese race-queen/idol types with proper Japanese names. (Although “Leona” sounds like she could be half-Jewish.) 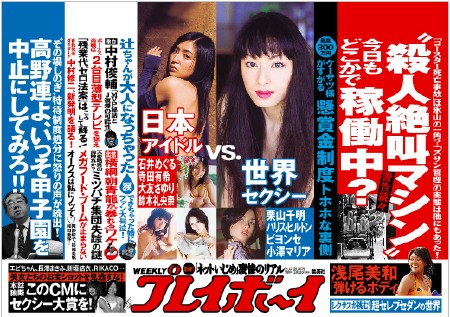 The right-hand group, however, is extremely problematic. Ignoring the fact that no one finds Paris Hilton “sexy,” Beyonce and Paris at least fit the most basic description of being global celebrities. Why then is purely Japanese actress and model Kuriyama Chiaki — the magazine’s cover model — part of “World Sexy”? This affiliation seems like an implicit acknowledgment that Kuriyama’s popularity stems solely from her appearance in Kill Bill. Objectively speaking, she does not fit the normal profile of a “hot girl” in Japan, and Pureiboi appears to feel the need to legitimize lust towards her from the perspective of popularity abroad.

Ozawa Maria’s inclusion in the “world sexy” group, on the other hand, boils down to question of nation-state being strictly defined through racial homogeneity. Ozawa is a 21-year old half-Japanese, half-Canadian porn star and Christian Academy in Japan graduate whose career is based exclusively in Japan. You may know her from such films as 2006’s Barely There Mosaic and 2007’s Popular Fashion Model Maria Ozawa Nakadashi Raped for 20 Consecutive Times! Ozawa is not especially known outside of the Japanese adult video market. Unlike Kuriyama, she has no feet on the global stage. Pureiboi consciously or unconsciously placed her outside of the “Japan” group only because she has what amounts to impure blood and semi-Western features.

So here, being a “Japanese idol” requires popularity originating in the Japanese market — unless you are half-Japanese, which makes “Japanese” categorization impossible. Even in matters of objectifying women, “Japan” remains so narrowly defined.