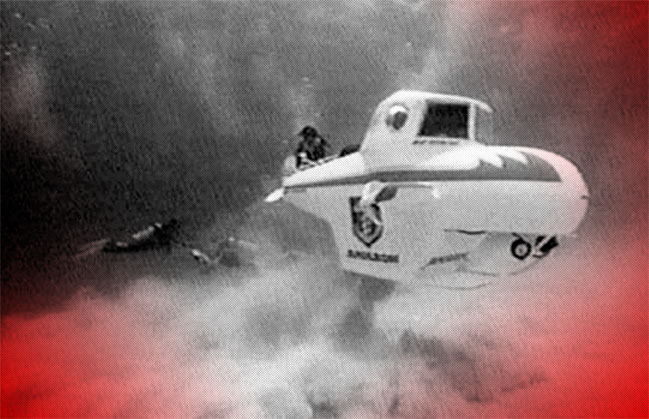 The obvious follow-up to our holiday coverage of ’80s ski classic Watashi wo Ski ni Tsurettete! — the Orient’s answer to Hot Dog…The Movie

, if you will — is its official follow-up from creators Hoichoi Productions: Kanojo ga Mizugi ni Kigaetara 『彼女が水着にきがえたら』

. A proper translation of the Japanese would result in the relatively sexy “When she changes into her bathing suit…” but alas, they stuck on their own blander English title: Urban Marine Resort Story. Between the original Japanese wording and the ad campaigns, viewers probably expected gratuitous and invasive close-ups of starlets prancing around in skimpy bikinis. What they got is something as austerely unerotic as the phrase “Urban Marine Resort Story.”

I guess I should describe the nominal plot holding together this full-length product placement extravaganza: two rich men battle over women and honor on the seas of mythical Shonan in yacht and sailboat, respectively. These old fellers have a tradition of playfully stealing women off the boats of the other. On one luxurious yacht outing with regally-perverted “Bad Guy” Yamaguchi (Ibu Masato), two members of this holiday weekend’s Team Chattel — virgin Tanaka Mariko (Watashi wo Ski ni Tsuretette!‘s Harada Tomoyo) and whore Ishii Yasuyo (Itoh Kazue) — get separated from friends on a SCUBA dive (complete with a ten-minute choreographed DPV-swimming scene) and end up discovering the location of a lost Korean War plane, which we later find out is filled with riches. (The superficial friend Yasuyo notes that she could buy a Chanel suit, a Bulgari watch, and an Audi with that kind of money.) When they finally surface, the girls are miraculously rescued by sailboat “Good Guy” (I forget his name) and his young sidekick Yoshioka, played by nearly-heterosexual Oda Yuji. Mariko and Yasuyo are then whisked via helicopter back to Yamaguchi’s boat by the Good Guy’s seventh wife, who apparently is happy playing accessory to his crazy woman-stealing adventures on the high seas.

Later, Yamaguchi’s yacht — the Amazon — is host to a semi-formal cocktail party (I guess Team Chattel brought a wide array of dresses for the three-day weekend.) As everyone is pairing off and settling into what should be a very, very long make-out session, the Good Guy sailboat team comes with a rubber motor boat and steals away Mariko and Yasuyo. Bad Guy Team Jr. pursue in matching uniforms on jet skis. Finally, the gum boat hits the shore Face/Off-style, and then: Exit Pursued by a Personal Hydrofoil. Bad Guys run into obstacles Speed Racer style, and then things unfortunately return to the airplane plot. Soon hordes of Chinese Mafia wearing identical black suits with red lining are storming upon Tokyo to find the location of this plane and its riches. They also pursue our heroes in jet skis. They are willing to use any wretched means to get the treasure — except actually kill any of the main characters with the deadly weapons they brandish.

I don’t want to ruin the end of the movie, but let’s just say that it reaches dénouement with giant harpoons. The main couple also finally consummate their budding relationship with an underwater stunt-double SCUBA kiss.

Most Japanese pop culture feels more like a Trojan Horse for advertisers than an actual objet d’art, and Kanojo ga Mizugi ni Kigaetara definitely lives up to our futuristic Bubble Era fantasies of “hyperconsumerism.” We are first introduced to Team Good Guy as they paint a huge Budweiser logo on the sailboat for no particular reason. Their rugged SUV is covered in brand stickers. The girls work in trendy jobs at the apparel giant Onward Kashiyama. The mise en scène was dreamed up by executives at Dentsu — everything blocked to emphasize the product qualities of the latest jet skits, underwater cameras, pocket TVs, and Southern All Stars tunes (now available on “compact disc!”) rather than the movements and emotions of human actors.

Although many herald the Bubble Era as the peak of Japanese wealth, and thus, cultural greatness, Kanojo ga Mizugi ni Kigaetara may remind others that the late 1980s was possibly the deepest nadir of Japanese female beautification strategies. Despite a successful balance between East Asian natural features and foreign cosmetic trends in the 1970s, something went horribly wrong around 1985. Short frizzy perms, huge shoulder pads, caterpillar eyebrows, and “natural” makeup were not such a good match for Japanese women. The period also falls through an odd transition stage where sexuality could be more openly displayed in pop films, and yet, management companies weren’t pumping their starlets’ breasts full of silicon ooze. So you get the best friend Yasuyo spending half the movie either in a tight-tube dress or a towel, but no cleavage and a David Bowie haircut. The standards for idealized female forms have unfortunately changed too much for any real bouts of nostalgic titillation. When rich people steal woman-objects off of yachts these days, you better believe they go for hot chattel who have scientifically enhanced their busts and eyebrow width to maximize sexual potential.

Posted in Film, The Past 4 Comments »