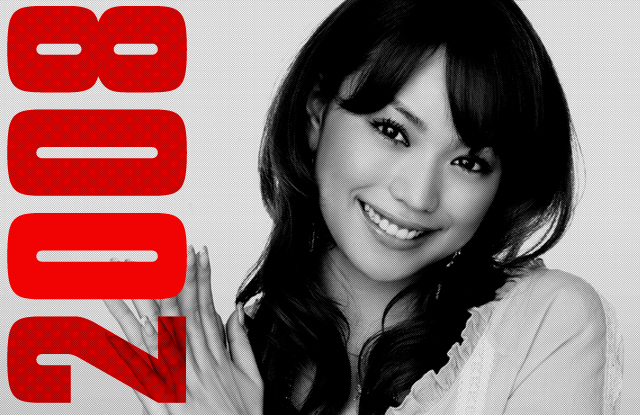 Can fruit graduate from jam? Can sand graduate from glass? I am having a hard time accepting that model Ebihara Yuri aka Ebi-chan has graduated from Japan’s most-popular women’s fashion magazine CanCam. She WAS CanCam! The magazine’s tremendous ascent to the peak of the media pyramid commenced in late 2003, just as Ebi-chan became the primary cover model. While the circulation of almost every magazine started a descent into oblivion, Ebi-chan gave CanCam the perfect paladin to heal the bleeding and sound a clarion call to collect more readers. Now after five years as the helm, it is time for Ebi-chan to shuffle off the sparkly pink coil and move on to a better place: by this I mean she will move up to CanCam‘s “big-sister” title — AneCan.

Ebi-chan is a relatively divisive figure for men: some love her, some are confounded. But she was never for us. She was the absolutely perfect prototype of a look beloved by young Japanese women, refined from the original gyaru subculture of the early 1990s: the curled chapatsu chestnut hair, the demure expression, the esquisitely-applied make-up, the brightly-colored conservative clothes. Maybe selective surgery helped sculpt Ebi-chan’s ideal facial angles, but in the end, her management created an aspirational beauty who could also somehow appear plausibly imitable to young Japanese women in clerical positions. Ebi-chan and CanCam sold a promise to 500,000 readers each month: a little hard work and faithful dedication to the magazine’s style teachings would make you into a Ebi-chan, ready to win the hearts of wealthy young necktie-less entrepreneurs in Roppongi Hills. And even as the Roppongi Hills New Rich future for Japan crumbles like the Tower of Babylon, the CanCam look remains the “base” of what women believe men want to see in potential girlfriends — whether true or not.

Post-Ebi CanCam is going to lack energy in the short-term. Maki has been positioned as Ebi’s replacement, which will be adequate for the time being. At the last Tokyo Girls Collection, Maki hit the runway to deafening applause, so the girls are ready to vote her as Prom Queen, but her relatively-weak artist management affiliation is going to prevent regular TV and CM appearances. Yamada Yu would be the obvious inheritor to the CanCam Presidency, but at this point, she is nothing more than a “special returning guest” to the magazine, leaving CanCam a weak bench. ViVi could very well abuse this chaotic post-succession period to steal the crown.

Looking back, I think it’s fair to say that Ebi-chan embodied the mass plurality of Japanese female culture for the first decade of the 21st century. But think about what this means. Unlike previous heroes — singers, variety show stars, actresses — Ebi-chan does not really do anything except appear and emote. Literally speaking, her skill is entirely superficial. Her lack of thespian prowess cut short a career in television dramas, and unlike Yamada Yu, she never launched herself as a singer. (The best they could do is have her act naturally — polite, yet annoyed — in these pretty good meta-commercials for Daiwa Securities.) Unlike 1980s idol Matsuda Seiko or 1990s Okinawan singer Amuro Namie, Ebi-chan does not represent a change to the role of women in society or the emergence of a strong new personality type. She is not deliciously mean, nor a heart-warming sweetheart. She is not shorthand for “change.” She uncompromisingly exists only as an image, like the human analog to Hello Kitty. And like Sanrio’s creations, the vanitas is the charm. We the consumer and viewer are allowed to project all the missing pieces onto the idealized visage, as to our liking.

But as much as we will no doubt decry the blank slate for ultimately promoting emptiness, models this inspirational do not come along so often. Ebi-chan may have graduated, but her flock will not be wayward. Sales for AneCan should get a boost in no time.