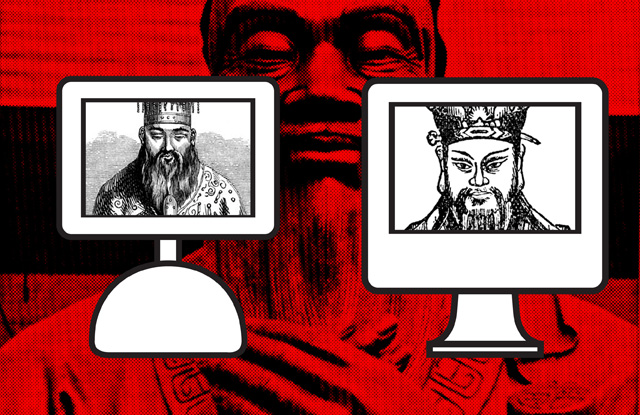 In a bald-faced imitation of David Plotz’ “blogging the Bible,” which culminated in the tome Good Book

, I am going to “blog” every chapter of The Analects of Confucius.

Now, The Analects share very little with the Bible and the other holy texts. They are not a series of tales, myths, extensive parables, or allegories (nor is Confucianism a “religion” per se), and this would seem to make “blogging” the texts a relatively dry exercise. The chapters are mostly just pithy sayings attributed to Confucius or his moral heroes — sometimes wise, sometimes cryptic, and almost always self-righteous. There is only the narrowest space for traditional “literary criticism” and few recurring characters — like “God” in the Bible — to analyze.

And yet, I have decided to blog my re-reading of The Analects for a few reasons. First, Confucian ethics are deeply buried into the basic structure of Japanese society, even if no one goes around calling themselves a “Confucianist.” Confucian principles came to Japan with the major importation of Chinese civilization back in the first millennium, and for years and years, provided the core educational materials for the civil service exams. In the late 19th and early 20th century Confucian ethics formed much of the moral code for State Shinto and modern Imperial Japan. The Imperial Rescript on Education? Chock full of Confucianism. Although Japanese elites tweaked and adapted Confucian morality to fit their own state structure, anybody interested in Japan should probably be familiar with The Analects for deep background.

Second, anyone who hasn’t read The Analects most likely has a warped view of the material. Confucianism has been mostly condemned as patriarchal and slightly soulless orthopraxy. Or at worst, a collection of sayings on par with “Man who walks through airport security gate sideways is going to Bangkok.” Yet, reading the Analects is relatively enjoyable, and I want to encourage others to take a look.

This brings us to the third point: there are “universal” principles at work in Confucian thought. The Analects sometime feels like a self-help book, but that may be its greatest quality. Almost anyone can apply at least some of its lessons to their contemporary life. In this re-reading, I am especially interested in the question, what has modern society rejected from this most ancient of ethical guides and what remains an accepted ideal for social behavior?

So join me in blogging The Analects. I welcome hardcore Confucian scholars to challenge my thoughts on hermeneutical grounds, as I have not read the few thousand years of subsequent debate on what Confucius really meant. (Blogging Mencius coming soon!) And I hope newcomers will take this opportunity to read the chapter online (the James Legge translation is available for free on Gutenburg. Each chapter should only take about ten minutes to read.) I am reading the D.C. Lau translation (Penguin Classics)

. Numbers in brackets (#) refer to the stanza within that chapter.

Things that Confucius likes: modesty, patience, sociability, constant pursuit of learning. Hard to really challenge that list or what follows in the rest of the chapter. Like us modern and post-modern types, the ancient Confucian camp does not like the braggart (14), the hypocrite, the glutton (14), the stubborn-headed, or the narcissist. The gentleman always works for others, rather than himself. As Confucius states in (16), we should worry more about appreciating others rather than others appreciating us. The only self-indulgence Confucius allows for is going crazy with more learning and greater virtue — and if you have some time to kill, fixing past mistakes.

Being nice to others, however, is not always about self-discipline. Good behavior has its rewards: for example, in (10) Confucius’ politeness opens doors to better information when visiting a new state.

In just the simple guidelines of the first chapter, Confucius’ emphasis on social bonds and social ritual — rather than purely individual action — are immediately clear. This is not “democratic” social network building, however. Filial piety and hierarchical obedience — in other words, being subservient to those above — are both key parts of the philosophy. Yet today there is no word with more party-pooping connotation than “filial piety.” Modern society has absolutely thrown it out the window. Imagine the ratings difference between MTV and the Filial Piety Network (FPN) for the key 18-24 youth male demographic. Modern society has basically told kids, it’s totally fine to hate and disobey your parents.

But maybe for good reason. Confucius is a “conservative” in the most direct sense of the word: in (2) he rejects the validity of rebellion and in (11) he shows that filial piety is more about protecting an unbroken line of tradition than just pleasing parents for its own sake. The virtuous man does not just follow the way of the parents while they are alive, but always and forever. Western contemporary society has come to fear and loathe cultural inertia, while Confucius is pretty clear that constancy is the solution to our problems. In the United States, youth rebellion is not just tolerated but has become a major part of the post-industrial economic structure. This seems utterly irreconcilable with Confucian thought.

Some may try to wiggle out of the dilemma — thinking that parents can be obeyed and pleased while revolution is pursued. But Confucius saw all broad social virtue — and even statecraft (5) — starting with the correct individual performance of human relations. They are intractably linked.

Okay, so you can be a self-disciplined good guy but still have ragtag friends, right? Like the lawful good Paladin of an AD&D game hanging out with bards, thieves, and warriors. Doesn’t work that way for Confucius: “Do not accept as friend anyone who is not as good as you” (8). Being a true virtuous gentleman is a challenge. And possibly very lonely.

But really, this all comes down to the “Man in the Mirror” principle: global change starts with yourself and your own enactment of proper social relations. This makes a lot of sense. And yet, in our modern society, we have conceded that most of our cultural heroes and artistic legends were drunks, lechers, megalomaniacs, and otherwise horrible to their friends and family. Is our newfound allowance of personal foibles a more efficient way of letting creative geniuses do their work without prejudice? But who needs genius when everyone in society is working hard to make themselves smarter and treat their fellow brother/sister/father/mother/neighbor/ruler with civility and proper ritual?

But wait, how do we know that works? For all the talk about Confucianism being a “moral practice,” maybe we need faith to believe that such small actions will actually cause big social change?

Posted in Philosophy, The Past 13 Comments »