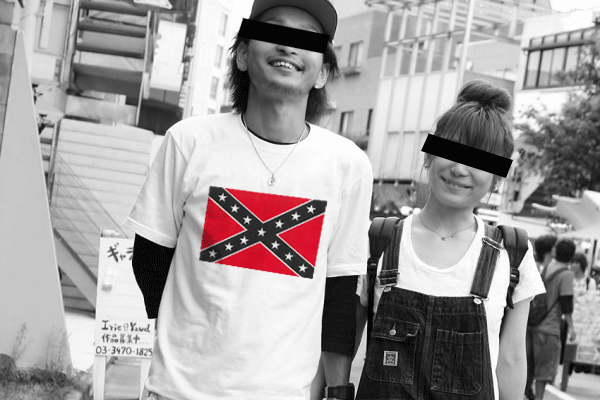 A few weeks ago, I was taking some visiting friends around Asakusa. This was unfortunately the day of the Sumidagawa fireworks, and we were trying to get out of the area in the late afternoon, before the crowds got too insane. Being 5pm, however, the yukata-clad girls and their plain-clothes boyfriends were already filing in, and we had to fight the crowds to get on and off of trains.

As we were transferring against the rush of oncoming people, I spotted a relatively average Japanese twenty-something in a white T-shirt with a huge red-and-blue Confederate flag and the catchy slogan:

If at first you don’t secede….

I literally stopped in my tracks and turned to my companions to tell them to check the shirt out, but all that came out of my mouth was something less intelligible than “T-t-t-t-t-shirt.” Then a North American, a few steps behind the Japanese guy saw my look of bewilderment and said to me with a knowing smile, “You like his T-shirt, right?” I silently nodded. (Sadly, no pictures. The image above is our artist’s abstract recreation.)

For a long time, my favorite incongruous Japanese youth fashion moment was a hipster Harajuku girl wearing a “Rush is Right” hat. This guy, however, may take the cake. With the Rush hat, there was really no way the girl — even if her English was decent — could have had any idea that Rush referred to right-wing American talk radio host Rush Limbaugh. She probably was just really into 2112. Actually, as we will see, I doubt she even considered the text at all.

Now, as someone originally from the American South, I find modern day secession fetishism to be odious — at worst, thinly-masked bigotry, and at best, a desperate identity politics born from a certain population segment’s growing isolation from the 21st century economy. It takes a real mean asshole to have thoughts like, “The South should leave the United States!” and an even meaner asshole to wear a T-shirt with that message in public.

The T-shirts, of course, were produced in the United States for people who hold this ideological belief and want to exclaim it to the rest of the world (or more accurately, to like-minded members of their local community). This is what T-shirts do: they convey messages. Almost without exception, American T-shirt culture is about statements: favorite bands, conspicuous consumption logos, jokes, affiliations, artistic expression, and political statements. Nonsense or non-obvious English on a T-shirt would either be a joke in itself or meant to suggest a mood. But either way, the person viewing the T-shirt would certainly try to decode meaning from ambiguous statements.

In previous years, this author and many of the readers had engaged in the debate about Japanese punk kids brandishing Nazi swastikas. (I have seen less of this in recent years, mostly because there are less kids into “classic” punk and most other imported Western subcultures) In the case of this makeshift Harajuku SS, the issue was that they were confusing the swastika for a punk symbol, almost exclusively due to Sid Vicious. The principle here is that within Japanese fashion, whether swastikas, a gorilla head from The Planet of the Apes, or Gucci pattern, logos are an important shorthand, carrying strong meanings from one person to another. For a small minority of Japanese kids, the sign of Hitler’s genocidal regime unfortunately got filed away under modern day re-enactments of ’70s rebelliousness.

But coming back to our guy in the Confederate battle flag, he likely had no intention at all to convey the symbolism of the flag. His embrace of the Rebel flag was pure accident or abstracted aesthetic choice — an old bulk-imported T-shirt chosen out of thousands at some anonymous vintage store across Japan. Some worldly buyer likely scoured every Salvation Army in backwater Tennessee towns circa 1997, and a decade later, a kid purchased one shirt from that original haul for ¥1000. And now the guy’s wearing it out to Asakusa because it was the only thing clean in his closet. Thank you, Japanese obsession with American vintage clothing.

What is interesting to me about this case, however, is how easy it would have been for the wearer to uncover the shirt’s meaning. The entire Japanese population is familiar with the roman script. We are not talking about trying to figure out ’90s pro-Serbian T-shirts in Cyrillic or an “Eradicate Tibetan Feudalism” written in Chinese. Also, had this been 1984, trying to decode the flag and the accompanying English joke would have required long trips to the National Diet Library and a few consultations with a local professor of American history. But now we have this thing called the Internet, and our Jefferson Davis could have easily googled the phrase and in about 15 minutes come up with a pretty good idea of what the shirt was talking about. There’s even a very detailed Japanese Wikipedia page on the Confederate flags, including details on the modern day controversy still surrounding it.

But I suspect that this guy did not do the research, nor would he even think to do the research. Between this case and hundreds of others compounded into my understanding of Japanese fashion, the very idea that the English on a T-shirt could mean something may be an Anglophone concept we project onto our readings of other countries. Japanese shirt designers often use nonsensical English phrases — yes, the ones that fuel the Engrish industry — and consumers make the unconscious assumption that they do not have to actually consider the content of their T-shirt messaging before deciding to purchase. Again, logos and symbols mean a lot, but T-shirt messaging is understood to be relatively content-free. A Dinosaur Jr. T-shirt is just a fashion accessory, not an indication of liking Dinosaur Jr. — a guitar-oriented rock band with alienating vocals. So if the basic idea of T-shirt text is opposite of the American one — T-shirts convey no messages other than brand logos and the most basic graphical, aesthetic elements — then no one is likely to consider the idea that strange English expressions need decoding.

We should likely refrain from normative judgments, but this general disposition towards T-shirt text does not bode well for English in Japan being something other than a diagnostic code meant for educational testing — like, maybe, a language used as communication. I can’t believe that an engaged student of French would not make a cursory attempt to understand any French language message on his/her on shirt. We English speakers can enjoy the irony of a Japanese kid unintentionally supporting white supremacy, but we are in fact laughing at a slightly depressing provincialism. That is to say, secessionist shirts in Japan may be a “random” quirk of globalized markets but they are not completely accidental. The whole episode requires a pretty significant linguistic obliviousness on the part of the wearer. Brian Austin Green’s terrible “midori” (みどり) tattoo on his chest is nothing to celebrate, but at least the 90210 star comes down on the side that foreign languages are meant to carry meanings. I never understood how radical that idea was.