Recently, the world’s least musical super-producer Tsunku (of Sharan Q and Morning Musume fame) appeared on a talk show in the town hall of his native Osaka and stated that he is interested in putting together a “Morning Musuko” group comprised of 16-22 year old “good-looking” boys.

He did not make it sound like the audition and production process was already underway, and it’s unclear whether this is anything more than idle banter. Because seriously pursuing a “Mo-Musuko” project is risking complete and utter civil war in the music industry.

For those who don’t know, Johnny’s Jimusho command a total monopoly over Japan’s entire “good-looking boy idol group” market. The fact that they essentially have no rivals in this area is not coincidental. Television stations believe that they need Johnny’s “talent” for their drama productions and thus generally concede a large number of appearances on the weekly music television shows to this idol monopoly. Johnny will not let any of his acts appear on any television show also featuring musical acts who could be considered a male idols, and so, a program’s use of competitors means automatically that Johnny’s Jimusho walks. Too much weekly use of the other team, and Johnny’s is happy to boycott a wider range of economic activities with your entire media conglomerate. They’re sensitive guys with a huge potato sack of market power, and any possible rival would have to dislodge that 2,000 lb. rock from the infrastructure to even get started.

Most other management jimusho are smart enough to avoid such a conflict. But some get cocky, like Amuro Namie and Speed’s company Rising Production (now Vision Factory), who attempted to break into Johnny’s turf with Okinawan-staffed dance acts, Da Pump, w-inds, and Flame.

How many times have these been on TV Asahi’s Music Station total? Two times: just Da Pump twice in 1997. 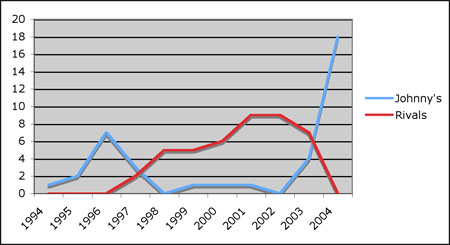 Fuji TV’s “Hey Hey Hey” is more complicated. Looking at the chart above, the original producer did not seem to be so keen on Johnny’s acts from the start of the show. For whatever reason, JJ’s boy groups were appearing on the show less and less (blue line) as the show progressed, just as the rival groups (the three Rising acts plus Doggie Bagg and co-producers Yoshimoto Kogyo’s Run&Gun) started getting a moderate level of exposure. But a new producer came to the show in 2004, welcomed back Johnny’s Jimusho and kissed the rivals all goodbye.

So, even if you’re top management company Up Front Agency and have a chest full of medals from the Morning Musume offensive, it doesn’t mean that winning the male idol war is actually possible. If Morning Musuko goes to market, either Up Front will get creamed and shut out of their usual television circuit, or perhaps, Johnny’s reign of terror may begin to crack. I just hope they won’t leave too much of the battle footage off TV.