One of the key presuppositions of this blog is, “For the last five years, Japanese mainstream pop culture has gotten progressively more boring and less stimulating,” to which many answer:

1. Yes! The innovation and spark of the 90s is gone!
2. No! Your head is stuck in the past and you are missing the stunning glory of today!
3. No! You are deluded and have no idea what is actually going on!
4. No! You are looking in the wrong fields. Culture is not just music and street fashion!
5. No! You are a hater!

Every month or so, I start toying with ideas 2-5 and ask my Japanese friends to fill me in on everything I am missing. They never come up with much of anything: They either shrug in resigned apathy or call me later on my cellphone to announce that they are so bored with things that they don’t leave the house and I have been talking to thin air the entire time. This gently nudges me towards 1 again. Then I have dinner with my friend and his arty 19 year-old date who tells me “the 90s were the era for me!” which kicks me back into the 1 position.

For a minute at least, let us presume that the “Pop Cultural Decline” idea is at least valid — viewed from a specific subcultural perspective held by many readers of this blog and general non-anime fans of Japanese culture. Some evidence:

1. All cultural industries in total nosedive, even with increased exports.
2. Koda Kumi — probably the most unattractive, uncharismatic, untalented idol to ever grace the island of Japan. And she is #1, as if all girls decided they wanted to worship stars worse than themselves on every possible criteria other than “fame.” Her success proves that Avex has the power to do unnatural, evil things: make rivers flow backwards and turn dogs against their masters.

So far, I have proffered the following explanations for the current malaise:

1. Demographics: smallest percentage of young people in population since WWII (and perhaps, ever?), so companies are moving away from teen-targeted product marketing
2. Economics: decrease of teenage allowances and increase of phone bills has led to reduced spending in the cultural markets of magazines, music, manga, books, and films
3. Information: reduced influence of magazine editors and other “curators” interested in importing “elitist” Western ideas and products into Japan
4. Psychology: a cohort of teenagers who only know economic downturn and have never grasped an interest in consumer spending, which until now, has been the fundamental action of Japanese pop culture
5. Class Dynamics: the rise in income inequality has created the need for middle classes to focus on status-displaying consumer items rather than taste-displaying consumer items

This WaiWai summary of a piece in R25 seems to open up another explanation:

Those quoted in the article seem to look back fondly upon the Bubble — which they never experienced as adults — because:

1. You were rewarded like a king for just showing up
2. The job market was un-selective and grossly overcompensating
3. Booze and hostess bars
4. Anybody with a paycheck got access to “exclusive” clubs 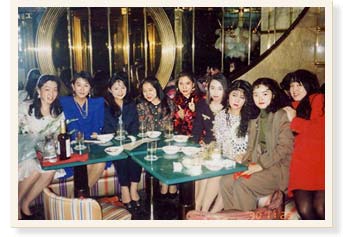 I can safely say that the cultural artifacts of the Bubble Era account for plus or minus 0 percent of what the rest of the world loves about Japan. Juliana’s and “bodicon” and the hack Roppongi demimonde chronicled by Karl T. Greenfeld never held much appeal to anyone who did not directly participate. Even our ’90s Japanese heroes like Takahashi Jun and Oyamada Keigo spent their Bubble years in underground clubs and small record shops sheltering themselves from the terrible pageant of wealth set to Eurobeat and bad bangs.

If you have the words “Gordon Gekko” tattooed on your lower back in katakana, the Bubble was for you. Otherwise, it was a cultural nightmare, an apocalyptic after-school special bemoaning the Third Deadly Sin. This was an era of tasteless nobody salarymen flush with cash, nonchalantly ordering $250 bottles of foreign whiskey every single night and then drowning out the executive flavor with ice water. They look back fondly on ’89-’91 solely because they can remember the feeling of clutching all that cash, losing up to ¥100,000 a night just because it was hard to eat and hold all those ¥10,000 bills at the same time. Everyone else in the entire world on the Bubble era: *shrug*

So, now we have to deconstruct the Bubble akogare of today’s youth. Essentially, they are dissatisfied with:

Recession has scarred the psyche into ignoring anything other than the aspiration for a high cash flow. And what would our fair youth do if they had money? Spend it on booze and hired girls.

And here come the bangs!

This Bubble lust also explains why hosts are so such a central part of the popular conscious of the moment: They get to dressed up in awful late ’80s fashions and bad tans and make a healthy salary from boozing and chatting with ladies (from the mizu shobai world). It’s as if the host profession perfectly combines the work and play of the Bubble Era into one lifestyle. If only mom and dad weren’t Waseda graduates from Jiyugaoka! If I had moved to Tokyo from some farm village in Saga, I would be host #4 in no time!

No part of this disposition lends itself to “let’s celebrate the arts” or “let’s use our hard-earned baito money to explore difficult artistic ideas.” Much like the Bubble, the more worldly Tokyoites seem to be going back underground, setting up their own subcultural communities, Moodman throwing parties in abandoned hospitals in Chiba. But this group cannot take pride in its permanent outsider legacy. They are not the radicals of the Natural Law Party, but more like the Reform Party in 1996 — an opposition in decline, glory days long past, like fans of Hall and Oates in ’92. Success was our greatest curse.

If this is all actually cyclical, the Bubble Revival should end relatively soon, although things feel too early for a real celebration of the ’90s. I don’t think this is all cyclical though — in five years, broke twenty-somethings are still going to want money for nothing and chicks for free (forgive me, Dire Straits). Maybe their bosses will stop bragging about the “T-backs” at Juliana’s though and start talking about how they once saw Ozawa Kenji on the subway.

All in all, one cannot expect much from a population enamored by the greed and banal debauchery of the Bubble Era. I am sure things “were crazy” but they also said that about being at Altamont. Remember: Richie Rich stank like a skunk. You don’t get clean in that bath of coins.