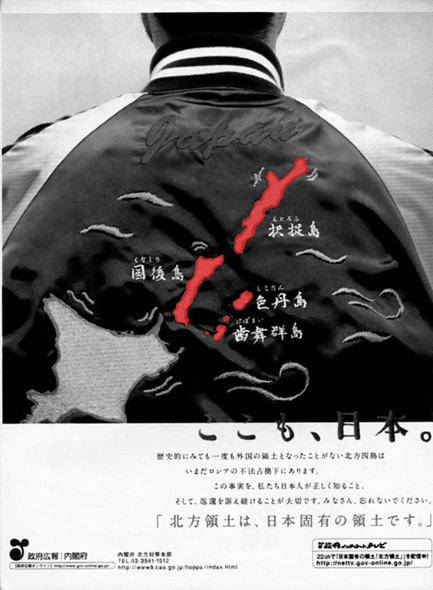 Evidently, the Japanese Cabinet Office has a yearly PR budget to place ads in women’s fashion magazines like CanCam to educate “the kids” about the never-ending Kuril Island Dispute.

The ad back in 2005 featured a straightforward manga-based explanation, but Team Japan Gov went all “Japan Cool” this year and decided to place a map of the four godforsaken disputed islands on the back of an imaginary Japan-theme embroidered “stadium jumper” baseball jacket, which for those not living here, are all the rage with rural delinquent youngsters with bad taste and cookie-cutter rock bands that play unattended gigs in Shimokitazawa. Perhaps referencing this ironically-uncool-and-also-actually-uncool jacket is an attempt to target a taste culture navel-gazing enough to actually cry the necessary tears over this spilt milk very serious issue. (Not that a CanCam girl would ever be seen in a jacket like this.)

Seriously, however, Japan totally called “shotgun” for these islands a long time ago and then some other country took the front seat — even though Japan clearly called “shotgun!” Japan may have longer, better, and awesomer historical claims on these volcanic rocks (how more clearly could they have said “shotgun”?), but when you go on Imperialist Death Race 1937 in Asia, you are pretty much going “all in” with your entire local empire in the pot. Losing $2 chip properties like Shikotan is exactly what happens when you ask the dealer to “hit you” at 19. But hey, if there is some geopolitical legal technicality that would let Japan expand its empire once again after 60 years of totally boring, soul-crushing, pansy-making, samurai-shaming peacetime, the State should let the Ebi-chan Epigone know all about it.

So not only does the government do absolutely nothing to remedy the kind of social stratification that causes middle-class office ladies to fight to the death for a space on the palanquin of a Lehman Brothers employee, but then uses the popularity of the guide-to-being-beloved-by-rich-men to give everyone a rallying point of past nationalistic victimhood to take their minds off of more pressing contemporary issues. How can anyone whine about the consumption tax and stagnant wages when Khabomai is in Red hands!

Interesting, however, to see the government try to build up sympathy for this ancient issue in such an odd media context. Will the Cabinet Office continue to advertise their ancient territorial losses in 2045 — when translucent titanichrome cyber-textiles are all the rage in Neo-Shibuya?

See a full-color version of the advertisement here.

Posted in History, Media, Politics, The Past, The Present 36 Comments »