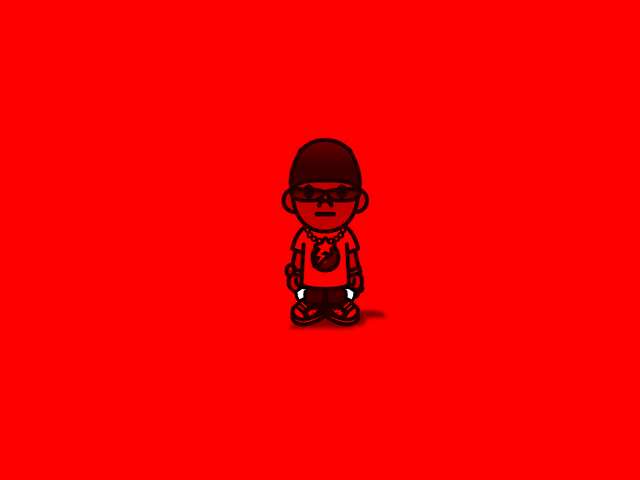 In Summer 2000 I came back to Tokyo to research the popular Ura-Harajuku street fashion brand A Bathing Ape for my senior thesis. My makeshift mentor was an editor of Hot Dog Press — a men’s lifestyle magazine from Kodansha that ceased publication in 2003 — who had covered the Fujiwara Hiroshi family of brands over the years.

One day he drew a triangle on a piece of paper with the x-axis being number of consumers and the y-axis being brand cachet. He explained, “At the top point here are very cool but low-selling brands. At the bottom of the triangle are all the mass market brands with huge sales but no cachet. The secret to A Bathing Ape and the Ura-Harajuku brands is that they keep themselves right in the middle of the triangle and don’t let themselves slip down. They have a healthy number of consumers but they make sure to never go all the way to the bottom.”

This was the general understanding about A Bathing Ape’s success: They would always use specific marketing techniques to appear underground even when selling to millions of young Japanese across the country. I understood this “brand cachet über alles” strategy to be so integral to their success that I ended my thesis with the prediction, “Once the Ura-Harajuku cultural complex disintegrates, Ape may lose its subcultural base and will be subject to the normal forces of fad market structures. [Founder] Nigo will probably stop producing Ape before this point in order to save the brand’s reputation.”

How wrong I was.

Within a year of writing that overly-confident forecast of Nigo’s future fate, the brand embarked on an extremely conspicuous tie-up campaign with soda maker Pepsi. Bape then quickly dropped all of its previously-important artificial brand barriers to mass market appeal and tried to win over anybody and everybody. When I moved back to Japan in 2003, things looked pretty grim for A Bathing Ape: The Tokyo stores were empty during weekdays, and the only consumers seemed to be the high school kids who came into the big city on weekends.

The brand hit their second wind, however, when Nigo met Pharrell Williams, and for about three years in the mid-2000s, Bape became one of the hottest brands on earth — this time framed as an integral part of the American hip hop scene. Nigo made one of the least plausible yet most accepted visual transformations in recent history, dropping the Cornelius-lookalike routine to slot in gold teeth and wayward baseball caps (or worse, a skull cap).

Despite this international expansion, Bape’s days at the top of the Japanese brand hierarchy were long over. The Ape head had become too ubiquitous, and the brand was spread way too thin. When the U.S. bubble for Bape burst around 2008, parent company Nowhere started heading towards serious financial insolvency. Now we have learned that Nowhere — A Bathing Ape’s parent company — had been suffering massive losses. The Wall Street Journal states that fiscal year 2009 ended with ¥267.4 million and 2010 ended with ¥119 million in the red. Nowhere also has debt in the range of ¥2.6 billion.

In 2001, we believed that A Bathing Ape had mastered the dynamics of the brand life-cycle pyramid so that it would never fall prey to the dangers of becoming too mass market and seeing their consumer base quickly dry up. But with the changes in 2002, the brand went on an expansion spree that could rival Uniqlo. There were Busy Work Shops in every single major and minor regional city from Kyushu to Hokkaido despite declining demand. At some point Nigo established a Bape-themed hair salon, a restaurant, an art gallery, shops for his secondary lines like Bape Kids and Baby Milo. Meanwhile they were so desperate for consumers that Nigo stopped any sort of passing attempt to be cool. Most famously, Nigo made $15 yellow Ape-head T-shirts for Nippon Television’s charity telethon 24 Hour TV in 2007, which could often be seen on the backs of housewives and elementary school kids.

In 2009 Nigo — seemingly bored with his crumbling empire — stepped down as CEO of his own company, giving the reigns to an ex-World executive. (Perhaps not so coincidentally World also bought up former Ura-Harajuku brand Real Mad Hectic.) Nigo lately has been working on not particularly significant side projects such as “Human Made” and suit brand “Mr.Bathing Ape.” Meanwhile things were not looking good for Nowhere post-Nigo: the L.A. store closed in 2010.

Bape did, however, have one remaining ace in the pocket: massive support from consumers in Greater China especially Hong Kong and Taiwan. Hong Kong in particular had always been attracted to the Fujiwara Hiroshi empire of Japanese street brands, and since 1999, HKers had been intimately familiar with A Bathing Ape. That year Nigo teamed up with locals Eric Kot and Jan Lamb to open an Ape boutique on the 17th floor of an office building. The result was the most draconian shopping policy in Ape history. Potential shoppers had to apply to become Busy Work Shop members, which required a Hong Kong passport. This excluded all non-Hong Kong residents from using the shop. Moreover the applications would be sent to Japan for ultimate approval. Once customers were approved as members, they would have to make an appointment before being able to enter the store — no casual walk-ins allowed. The image, however strict, matched perfectly with the super-exclusivity of the original Japanese strategy.

Although the first Busy Work Shop Hong Kong was never a huge phenomenon in itself, the brand’s sudden presence in the Chinese language media put A Bathing Ape in the wider Asian pantheon of hot labels. The Baby Milo shirts in particular were a huge sensation in Hong Kong, making the evening news as a noteworthy youth trend. While Japanese lost interest, the rise of a new youth consumer in East Asia balanced things out for brands. Anecdotally-speaking, most shoppers I have seen inside or near A Bathing Ape in Harajuku have appeared to be from Greater China. Nigo has also directly targeted fans in these locations with a Taipei store in 2005 and an enormous new store in Hong Kong in 2006. Beijing and Shanghai opened in 2010.

So if Nigo’s 18-year old pet ape is being primarily consumed by the Chinese in its old age, it only makes sense that a Hong Kong based company — I.T Ltd. — would buy out the whole thing (including the debt). The depressing detail was the 90% equity purchase only cost the acquirers $2.8 million. Nigo has easily put more than that in his art, toy, and vintage LV trunk collection alone. This sell off of A Bathing Ape is an incredibly dramatic flame out for a company that defined the potential of Japanese independent brands to go abroad and changed the face of global fashion. It’s better than bankruptcy but not exactly a feel good denouement to an otherwise remarkable success story.

But just as Japanese apparel companies like Onward and Renown bought up heritage Anglo brands like J. Press and Aquascutum in the ’80s and ’90s, Chinese companies are likely to be the future bulk purchasers of Japanese brands. The Japanese fashion ecosystem relies more and more on the flow of East Asian cash, and the desperate fire sale of Nowhere is likely the opening paragraph to an entirely new chapter of Japanese cultural history.