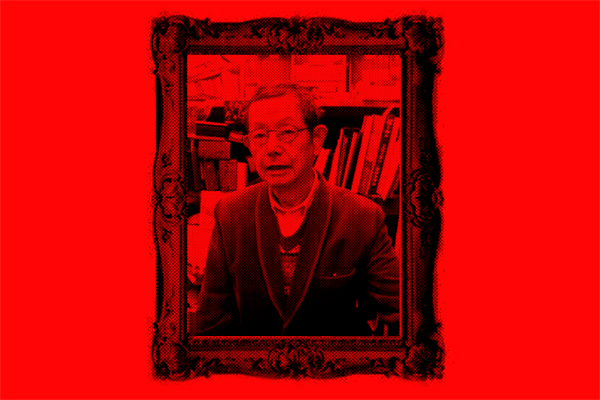 Tokyo tailoring legend Namiki Yuzo passed away on May 12. Although never a major presence in Japan’s fashion world nor well-known in the broader culture, his shop Yofuku no Namiki (洋服の並木) in Umegaoka was renowned in music and showbiz circles for being the place where young punk, mod, and rock bands (and comedians) could make eccentric, matching suits to wear on stage. In his lifetime, he claimed to have made over 10,000 suits, and one of these appears to have been made entirely from a Union Jack.

While custom tailors in the West have become the exclusive privilege of the upper classes, Japan still enjoys a strong culture of affordable local suitmakers. In the early 20th century, virtually all Japanese suits were tailor made, with less affluent men wearing the same suit every day. When the fabric started to show an embarrassing level of wear, you would take it back to the tailor who would turn it inside-out and sew it back together again. In this tailor-driven culture, off-the-rack suits were unthinkable, and attitudes only slowly started to change in the late 1960s with the development of national fashion brands.

Japanese men today mostly wear off-the-rack suits from big box stores like Aoyama and Aoki, yet Tokyo neighborhoods are still littered with old-school local tailors. The department stores also remain bastions of custom suiting. Isetan, for example, has an entire section for complete custom tailoring in the ¥300,000+ range and then on a different floor a small selection of pattern-orders available for around ¥120,000 from the city’s top young tailors like Caid and Tailor&Cutter. There are even cheap made-to-measure chains like F-One where suits can run as low as ¥19,800.

Meanwhile Yofuku no Namiki offered custom suits of virtually any historical style — tight ’60s British mod three-buttons, long-coated Edwardian Teds’ get-ups, zoot-suits, 1970s monstrosities with giant lapels — starting at a mere ¥39,900. (Examples of his work can be seen here.) Everything about Namiki’s store was different from his contemporaries. Most suit tailors fill their windows with alluring bolts of wool but Yofuku no Namiki’s glass porch doors are plastered randomly with faded color photo copies of bands he had clothed. The store’s interior could be most charitably described as a mini-warehouse of deadstock fabrics chaotically stacked up against each other. Yellowing copies of Men’s Club sat on the ground to be picked up by customers as style guides.

Customers who emailed in advance got 5% off the order. Namiki himself — a gray-haired man in glasses with only the slightest hint of past subcultural affiliations — would personally take your order, do the measurements, and give you gruff advice on the stranger parts of your requests.

I first went to Namiki upon my move to Tokyo in 2003. Back in New York, I had sadly blown hard-earn savings on a full-order, Modernist navy suit, but the very conventional tailors completely ignored my request for “stovepipe” pants and snug shoulders. I hoped to redeem my failed investment by taking it to Namiki. He instantly recognized the problem, asked me, “You’re not planning on gaining any weight are you?” and then for ¥10,000 slimmed the pants and made the jacket actually look like it belonged to me. I returned a year later to make a black blazer with white piping much like the one from The Prisoner. Later he made me a standard chalk-stripe suit in winter wool, and later, a fancy shawl-collar tuxedo. Certainly when compared to Japan’s upper echelon of master tailors, Namiki was not known for his craftsmanship. At the price you paid, you put up with weird conventions in Namiki’s work: costume-grade fabrics, extreme shoulder padding, a demand to write a word of your choosing inside of the jacket. But the store offered an incredible dream: you could make anything your heart desired for less than ¥40,000.

Yofuku no Namiki was always one of my absolute favorite places in Tokyo in that it represents the continuation of an incredibly specific subcultural service that has gone extinct nearly everywhere else in the world. For this reason, I included Namiki in CNNGo’s 50 reasons why Tokyo is the greatest city in the world, just between the cyberpunk Shuto-ko expressway and the lysergic Reversible Destiny Lofts. Tokyo’s greatest asset is its thousands of obsessive and idiosyncratic businessmen who eschew all capitalist logic and common sense to run narrow-focused pursuits that would instantly disappear in more rational cities. Namiki was the only one in town who centered his entire suiting business around 20-somethings in bands — with the side business of suiting them for weddings once they “grew up” — and it worked! Even with Namiki’s sudden death, the shop has announced it will stay open, and they no doubt will have hundreds of orders to fill in the next few years. So there is still a chance, at least for the moment, to make yourself a high-buttoning, double-breasted suit that looks exactly like the Saturday night duds of Brian Jones or the lunch time styles of the “Noonday Underground.”

Posted in Fashion, Markets and Consumers, The Present Comments Off on Namiki the Mod Tailor