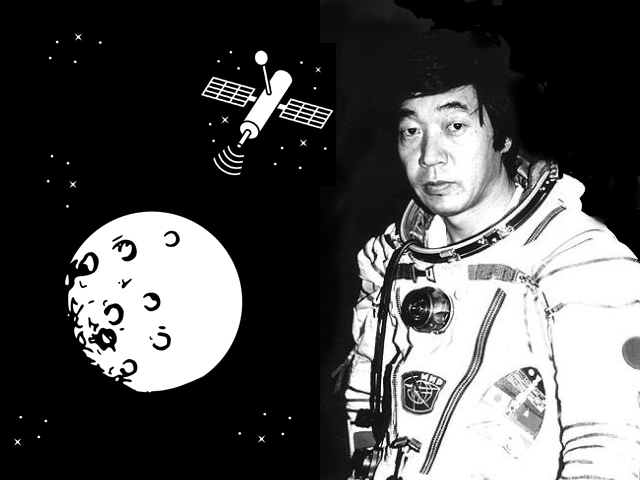 The impending Soyuz launch of JAXA astronaut Satoshi Furukawa to the International Space Station brings back memories of some of Japan’s less storied spacemen. Let’s turn the clock back a few years to…

Stardate 2006. Livedoor entrepreneur Daisuke “Dice-K” Enomoto pays $20 million to Space Adventures for a ride on a Russian rocket to the International Space Station. He then announces his attention to forgo all the customary science experimentation during his time in orbit and instead cos-play as Char Aznable and build Gundam model kits. Sure, it sounded ridiculous at the time, but perhaps in hindsight Enomoto was making a grand statement on the rise of Akihabara and anime culture on the global stage.

Yet in an equally fitting metaphor for the rapid rise and fall of Japan’s “gross national cool,” Enomoto’s otherworldly otaku aspirations never got off the ground. Unceremoniously bounced from the program for vague medical reasons, he spent the next half-decade in decidedly Earthbound courtrooms in a vain attempt to reclaim the huge sum he paid to the American space-tourism company.

Although Enomoto may certainly go down in history as Japan’s greatest failed space tourist, he can’t hold a beam-saber to Akiyama Toyohiro — Japan’s first astronaut and a living monument to the excesses of Japan’s Bubble Era.

In 1989 — as a festive celebration of its 40th anniversary — Japanese TV station TBS decided to pay the Soviet Union somewhere between $12 and $14 million to send a reporter up to Space Station Mir. Heavily promoted and sponsored, the idea was to boost the second-run station’s image by beaming back a series of nightly week-long specials from orbit: Nihonjin Hatsu! Uchuu e (“The First Japanese in Space!”)

Think about this for a second, because it’s difficult to fathom from our standpoint abreast two decades of straight economic stagnation. A Japanese TV station — and not even the top station — had enough cash floating around to buy themselves into a Cold War superpower’s space program. Japan would finally send a man to space, and it would be a commercial enterprise funding the entire thing. The Soviets meanwhile had scored a Cold War PR coup, even going so far as to bump up the flight date to pre-empt NASA and ensure that the first Japanese into space flew on a Soyuz rather than a Shuttle.

Once the program started in earnest, Soviet flight doctors winnowed down a pool of hundreds of applicants from the broadcaster’s employees to two final candidates: Kikuchi Ryoko, a 26 year-old camerawoman whose hobbies included mountain climbing, cycling, and skiing, and Akiyama, a 48 year-old senior editor whose hobbies appeared limited to chronic overtime and a four-pack-a-day cigarette habit. Given the era, the final decision shouldn’t come as any surprise. Akiyama was an ideal “every man” in a society where middle-aged men essentially called all the shots. Thus it was that a chain-smoking, over-the-hill salaryman came to carry the entirety of TBS’ multimillion dollar investment on his shoulders.

Somehow Akiyama had what it takes to make it through standard cosmonaut training, a process on which the Soviets refused to compromise for safety reasons. And on December 2, 1990, he rode into orbit aboard Soyuz TM-11. TBS of course broadcast the entire thing, cutting between images of Akiyama’s nervous wife and a Marxist-chic control room filled with cartoonish, medal-adorned Soviet generals shaking hands. The Japanese government meanwhile maintained an almost stoic silence about the whole affair. Japan’s Powers that Be were undoubtedly none too pleased at seeing their nation’s momentous first steps into space being made on a Soviet rocket boldly festooned with the logos of an electronics maker, a credit card company, and a sanitary napkin manufacturer.

While Japan and the USSR found a new friendship in this surreal moment of capitalist excess, Japan-bashing Western media gleefully portrayed Akiyama as a spaceborne stooge. They cast the hapless space tourist as a “whiskey-swilling idiot” and “anti-hero” while cherry-picking his most inane observations for translation. This proved none too difficult a task: “Hokkaido looks like a yummy piece of kelp!” was one of his more memorable quips.

It’s entirely possible that Akiyama had a more intellectual repartee planned, but he spent the vast majority of the flight plagued by space sickness so severe that one of his fellow cosmonauts remarked that he “hadn’t ever seen a man vomit that much.” Although he gamely made his way through his daily scheduled broadcasts and conducted vague experiments on the adhesive properties of tree frogs in zero gravity (criminally overlooked by the Ig Nobel Committee), today the consensus abroad seems to be — perhaps uncharitably — that he “did not have a very productive flight.”

Then again, Akiyama’s sojourn was never about the Right Stuff. It was about the Right Ratings, a PR stunt of the sort that could only have originated in a smoky Bubble-era boardroom. But even from that standpoint, the flight seems to have been only a middling success, with viewership quickly dropping off after the initial excitement of the launch and docking at the station. And even more sadly, the flight barely made a dent in the collective Japanese memory, evaporating like wisps of liquid oxygen wafting from a rocket on its launchpad. No films, no manga or anime, and not even any books (save those written by the man himself) chronicle Akiyama’s ascent into the heavens.

It’s hard to imagine a nation’s first spaceman so thoroughly disappearing from the pop-cultural record. But in the final analysis, perhaps Akiyama was a little too everyman to become a hero. His first words in space were a less than charismatic “Is this live?” and final words after touchdown, a Homer Simpson-esque “I want a drink and a smoke.”

Deep-pocketed space tourists like Dice-K aside, the “salaryman spaceman” has been replaced today by the likes of Mamoru “Mark” Mohri (who would have been Japan’s first astronaut had the Challenger disaster not delayed his flight by five years), Furukawa, and other full-time professionals groomed by JAXA and trained by NASA. Indeed, Japan now has a full cadre of badass pro astronauts who have inspired society with their space experiences.

And what of Akiyama? Increasingly disillusioned with life at TBS, he quit shortly after his return from space, reinventing himself as an author and organic shiitake mushroom farmer in Fukushima. Forced to evacuate in the wake of the disaster, Akiyama recently went on record speaking out against the government, Tepco, and the mass media. Not incidentally, he also touched on the “media perception gap” between foreign and Japanese press.

This recent appearance aside, Japan’s charter member of the Association of Space Explorers all but slipped from the radar in recent years. Although Akiyama appeared several times over the years as a freelance TV commentator in various capacities, for the most part he withdrew from public view after his heavily televised jaunt into the Final Frontier — a fitting symbol for a Bubble that didn’t exactly pop but slowly faded away.

Posted in Conceptions of Japan, History, Technology, The Past 6 Comments »