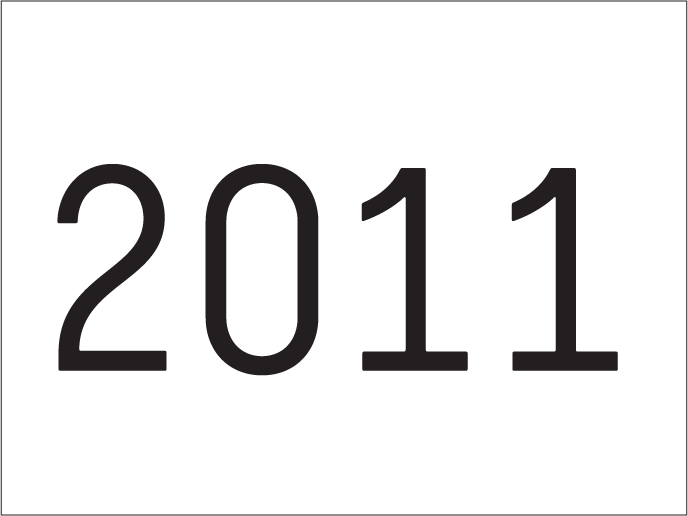 AKB48 took the top five slots on the Oricon singles charts this year, and its sister unit SKE48 took the #9 slot. Compared to the last few years, the AKB48 phenomenon has massively raised the number of records sold within the Top 10 — moving from a low in 2007 of only 4.3 million copies to now 9.5 million. And that growth was all AKB48. The “AKB48 Marketing Method” of encouraging fans to buy more than one copy each — known as AKB商法 in Japanese — evidently works!

The two other cult acts to take over the charts came from Johnny’s & Associates: boy band veteran Arashi (嵐) and brand new Kiss-My-Ft2, whose name sounds eerily like the broken part of an URL despite Johnny Kitagawa’s personal vendetta against this entire “Internet fad” that has been sweeping global culture.

The only other act on the singles charts is the kids behind the hit “Maru Maru Mori Mori!” — a novelty song that plays under the ending of a Fuji TV show. (Hear it here.) Children’s TV shows, such as moe-inspired “Cookin’ Idol I! My! Main!”, now all have this kind of digitized bubblegum sound that might as well be a sub-Nakata Perfume B-side. This particular song gets bonus points for existing outside of the relatively narrow idol-groupie world, but loses them immediately for sounding not so far from it.

While the music industry is probably patting itself on the back for strong singles sales from its top acts, notice that no one with a semblance of “musicality” can manage to sell singles in any meaningful numbers. Admittedly the album chart looks a bit better. Sure, Arashi and AKB48 took the top two spots, but there’s at least there’s some diversity beyond homegrown idol pop: two K-Pop entries Girls’ Generation and Kara, as well as people who write their own songs like Lady Gaga, Kuwata Keisuke, and non-threatening Sony group Ikimono Gakari.

If we time travel back to the distant year 2008, we can locate on the singles chart actual “bands” (apparently this is an old term for groups of musicians who wrote their own tunes and played “gigs” in “live houses,” sometimes with their own instruments) like Southern All-Stars or Mr. Children. This is no longer possible. The discrepancy here likely means that the singles market has become 100% dedicated to bands whose fans are either willing to pay whatever it takes for as few songs as possible (i.e., nerds, Johnny’s-obsessives) or too poor to buy albums (i.e., elementary school kids).

Since Oricon still plays the official role in society for determining what is “popular” despite the fact that purchasing music itself has become a slightly less-than-mainstream activity, J-Pop appears to be the complete dominion of idol groups and similarly infantile-sounding things. The only viable non-idol options are artists who have literally been around for decades — Kuwata, Amuro Namie, SMAP, B’z — powered by an army of ever grayer ex-young people.

This in part goes back to my “Great Shift” thesis, that “normal people” who used to like “music” stopped buying so-called “music,” so that only the loyal group fanatics are willing to shell out the money. Honestly if you don’t buy the group’s CD or two, you’re a terrible, horrible, sinful fan. And think about it: a decent, honest, devoted fan certainly doesn’t make a decision to buy the CD based on the quality of the music held within. That’s, I guess, for cynical people.

(And by the way, when I say CD here, I mean “compact disc.” The Japanese music market is still majority physical sales rather than digital downloads, and in general the industry remains very bent out of shape about the decline in CD sales. I suspect some of this stems from the fact that the record labels often don’t own master rights, which means they only make money from distributing and selling plastic. Whatever the case, selling a CD is possibly the most anti-consumer thing happening today. How many people you see every day walking around with a Discman? Yes, you must buy a physical object from which you can’t directly enjoy the audio on your own 21st century audio device.)

Anyway — had one of J-Pop’s non idol groups put out a song that captured the heart of ~1% of the nation, that entity would have dominated the charts. This did not happen. None of the non-idol groups or individuals managed to break the half-million mark, even with their albums. Kuwata managed to squeeze over 400K with MUSICMAN. Think about it: only .33% of the Japanese public needs to support a music group that formed in order to create original music, rather than because their status and money starved parents signed them up for indentured servitude at a local jimusho. Yet none of these “hey we are serious musicians!”-type groups can even win the hearts of 1/3 of a percent of the population anymore.

Not that “bands” are really having a moment in the rest of the universe either. The Billboard chart in the U.S. is filled with Katy Perry and LMFAO (although many Top 40 songs do show up on snobby critics’ best lists). I don’t necessarily pay attention to American radio pop, yet I did know that Cee Lo Green track “Fuck You” because it’s made so that no one could possibly dislike it and everyone’s seen that video of the girls singing Nicki Minaj’s “Super Bass.” Both of those songs are pretty decent singles from my narrow subjective point of view, but moreover, they seemed to have made a dent in wider society.

Meanwhile AKB48 is everywhere — and we mean everywhere — yet the musical component of this bikini collective is much more obscure. Sure the tracks are karaoke fodder, but the actual musical content of the top Oricon hits is otherwise confined to the rooms and headspace of hardcore fans. You can easily live an active life in Tokyo and never once hear any of these songs. Walk into a Tokyo store and sometimes you’ll hear AKB48, but you’re more likely to hear American Top 40 or some Usen station of 1980s power hits (“Private Eyes” etc.). Tsumari: The records with the “highest sales” don’t have “the most mindshare in the Zeitgeist.” Well, actually and sadly, these songs are the ones with the most mindshare, and today that means near nil in impact outside of the superfans.

But that’s what you get though when idol music — a promotional vehicle in audio format for a heart-warming young woman or 48 — is law of the land, and why it’s probably not worth paying attention to the Oricon singles charts as anything other than a measure of entertainers rather than musicians. This isn’t really an elitist argument. Again, go back a few years and you’ll find musicians who used to chart such as GReeeeN, Orange Range, and Kobukuro, who were far from being critical darlings but were non-idol music groups. Yet even these groups have faded into memory, enjoyed by only a tiny subset of human beings in Japan who like musical music enough to buy it.

I had the opportunity a few weeks ago to hear an actual live band play AKB48’s mega-hit “Heavy Rotation,” and stripped of the key video visuals of its diminutive singers in Frederick’s of Hollywood lingerie kissing each other (which I am led to believe by the commenters here that this is what Japanese girls get up to all the time), I had a chance to listen to the song as a song. Certainly one barrier to liking AKB48 is the otaku-pleasing aesthetics, which by their nature, should surely churn the stomach of someone in my snobby taste culture. (Arama They Didn’t readers, this is a good time to note that we exist in parallel “taste cultures” and you shouldn’t be offended that I don’t like the music of your world, as you most certainly would not like most of the stuff habitating my iPod. You would think that Faust is “weird,” and you’d be half-correct, but I wouldn’t get all “butthurt” and spam your comment filter if you weren’t into that Rustie album.)

Anyway, stripped of the AKB48 aesthetics that make AKB48 AKB48, “Heavy Rotation” mostly just sounds like a set of textbook J-Pop musical conventions stacked up against each other. The semi-anonymous songwriter Yamazaki Yo (山崎燿) apparently spends his non-AKB48 time working on anime themes and such, and I guess for the Akihabara millieu, total stability in melodic and production convention are key. The audience demands as such.

For the longest time though, pop music was the place in society you always looked for innovation. That’s the paradox of pop: You want what you know but with a slight twist so you feel like you are enjoying novelty and social change. This held pretty consistently in J-Pop as well. There was a time when all idol music was orchestrated. Then suddenly it was all synthesized. The melodies in the 1990s also drastically moved away from demi-“Oriental” kayokyoku and took on hints of R&B. J-Pop changed.

And this is what makes J-Pop now so disappointing to people who like “music.” Sure it’s sufficiently entertaining and shocking that the kids are into something so overly and openly otaku-esque, but the music itself is a little too familiar. It’s not even really “retro” and fighting against modern convention. We’ve not just heard these songs before — we’ve heard them recently. The otaku took over culture, and it turns out they are the arch-conservatives of pop, who want everything to hark back to a more simple age… of three years ago.

The Internet’s J-Pop true believers have a good point though — why waste time thinking about this music that I clearly don’t like. We should spend our energy cheering on the underground or the talented or the talented underground. But think about it — I like music, I live in Japan — I should therefore be interested in the nature of “music most popular in Japan.” What’s interesting, however, is that it’s not just fussy music fans like me that are disappointed not to find their own reflection in the mass culture mirror — it’s anyone who’s not an idol fan nor someone who got into their favorite band 10-30 years ago. I want to give the otaku a thumbs up for effort and go find some other artistic field to show interest in, but honestly-speaking, I’d like it even more if the Japanese music industry offered something for the rest of us too.