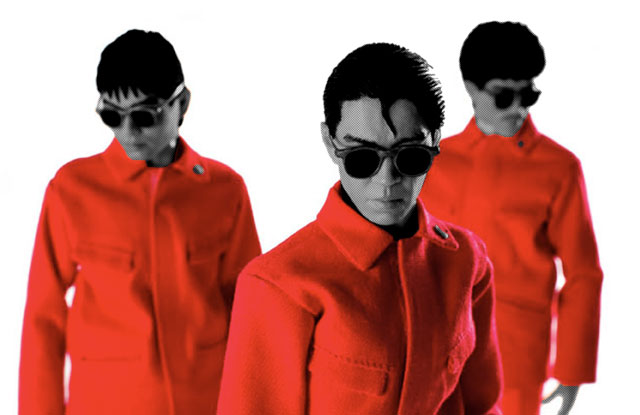 Hosono Haruomi, Takahashi Yukihiro, and Sakamoto Ryuichi’s Yellow Magic Orchestra (YMO) have been one of the few Japanese bands to receive superstar status both in Japan and abroad. Their self-titled debut

offered the world a self-Orientalizing synth paradise, something like a high-tech disco upgrade on Chinese restaurant muzak. By 1980’s X∞Multiplies

, however, YMO were creating a unique propulsive techno-rock that augured the bright promises of ’80s culture and set the template for every Konami game soundtrack.

Be warned: the Japanese version of X∞Multiplies is not your standard LP: the songs are broken up with long skits from Japanese alternative comedy legends Snakeman Show. Snakeman Show featured three comedians Masato Eve (伊武雅刀), Katsuya Kobayashi (小林克也), and Moichi Kuwahara (桑原茂一), with Kobayashi being “Snakeman” in a name inspired by famed American DJ Wolfman Jack. They hosted a popular radio show in Osaka, but their appearance on X∞Multiplies would transform them into national comedy heroes. (More English information here.)

Although some of the skits on X∞Multiplies are nominally in English (including the wicked “I love Japan”), the American release of the album wisely banished the comedy, bringing in the musical highlights from YMO’s previous album Solid State Survivor

to fill the gaps. Thanks to modern technology, however, the original Japanese version of X∞Multiplies is now available to millions as free illegal download on Rapidshare and Megaupload — oh, and of course, Amazon Japan import. Many non-Japanese YMO fans now have a greater chance to finally hear these “lost” Snakeman Show skits. (Purists, I know you collected these long ago.)

As I listened to X∞Multiplies recently, one skit struck me as particularly illuminating in regards to Japanese attitudes towards popular culture during the 1980s. So I translated the entire transcript of Track 11, simply entitled “Snakeman Show.” The skit involves a mock radio talk show with three young music critics “arguing” about the state of rock music in the 1980s. The argument is between Critic 1 and Critic 2 , with Critic 3 only droning on about YMO and being ignored. A few notes follow.

For reference, an MP3 of the track in question.

Radio Announcer: Good evening, everyone. It’s now time for the program “Young Echo.” Tonight we are joined by young music critics, who will give us their opinion on the topic of discussion: the rock scene of the 1980s. Everyone, welcome to the show.

Critics: (all) Hello. Thank you for having us.

Critic 1: (takes a drag on his cigarette) We’ll start from me. See, for me, I order a lot of records from overseas. So with rock right now — what would you say? — there’s some good stuff but also some bad stuff.

Critic 2: I’m a bit different from you on that. I have a lot of musician friends in New York and L.A. who always send me records. And when I listen to those, there’s some good stuff and also some bad stuff.

Critic 1: No, but listen, I have a lot of opportunities to go abroad and see concerts. I just got back from going around London and New York. The thing I felt most when I was there is that there’s some good stuff but also some bad stuff.

Critic 2: I have a different view on this than you! I understand English. I am always being asked to be on shows overseas, but I have to turn them down. The more I listen the more I see that there’s some good stuff and also some bad stuff.

Critic 1: Wait, no, there’s something strange about what you are saying. It’s not like that. You have to understand that I live my life listening to rock eight hours a day. If you did that, you would understand there’s some good stuff but also some bad stuff.

Critic 2: No, no. This is not about the amount of time spent listening to music. I own 50,000 records. I own 50,000. My LPs are all rock records. You listen to those and you’ll realize there’s some good stuff and also some bad stuff.

Critic 1: You are totally wrong! If we are talking number of records, I own 80,000. All rock. If you listen to all of those, clearly, there’s some good stuff but also some bad stuff.

Critic 2: I feel a bit different from you on this. I do interviews over international long distance, and we really talk about rock. If you listen to that you’ll know that there’s some good stuff and also some bad stuff.

Critic 3: Can I say something? I absolutely think that Y.M.O. is —

Critic 1: You are so wrong. What you are saying is so off. Can I explain? In order to understand rock, you can’t remove the fashion. Are you listening? I am wearing silver London boots, right? Look. It’s not a big deal. I own ten pairs of London boots. If you think about rock while living this rock lifestyle, you would say that there’s some good stuff but also some bad stuff.

Critic 2: Wait a second there. When foreign artists come over to Japan, I hang out with them. I take them to tempura, shabu shabu. I have to take care of them. And we get a chance to communicate. So with rock, there’s some good stuff and also some bad stuff.

Critic 3: If we are talking about fashion, it’s all about the Mao suit.

Critic 1: Are you crazy? You are contradicting yourself. You are totally contradicting yourself. I host ten radio shows. I am going to host a rock show on UHF soon. Since I live in that kind of world, I can state clearly that I am the first person to really understand rock. So when you say it like that, I think there’s some good stuff but also some bad stuff.

Critic 2: No, no. I see this a bit different than you. I am about to produce a record! What’s more, a New Wave record! If you actually tried to make rock yourself, you would realize that there’s some good stuff and also some bad stuff.

Critic 1: (angrily) Listen, buddy! I don’t know anything about New Wave or whatever. But I am here right now as a guy who is trying to figure out whether to take Y.M.O. up on their invitation to play with them at the Budokan. There will be 10,000 people there….

2) At risk of killing the joke in an avalanche of overanalysis, the two critics are essentially saying the exact same thing, other than a small difference in conjunctions (and vs. but). But they are passionately arguing about who has the greatest legitimacy to make such a statement. The interesting part is how they try to build legitimacy. The two techniques are (a) proving the amount of records owned and time spent at the activity, and (b) proving direct interaction with the West.

The first method echos my earlier thoughts on the importance of “orthopraxy” in Japan: i.e., legitimacy from actual praxis of an activity rather than a more abstract sense of belief or “spirit.” In the case of the radio show, none of the critics have anything to actually say. There is no “content” in the message — only the meaningless “there is some good stuff and/but some bad stuff.” The entire dialogue consists of attempts to one-up each other in the arena of praxis. Even when Critic 1 tries to talk about living a “rock lifestyle,” he demonstrates this not through an abstract way of life or attitude, but how many “rock” shoes he owns.

For method number two of “association with the West,” I find their attitudes to be especially evocative of Japan in the 1980s. For most of the post-war, the entirety of “pop culture” was seen as a “Western” (read: Anglo-American) enterprise. Just as judo and tea ceremony are “Japanese,” rock music was Anglo-American — at least for the first 40 or so years of Japanese popular music. So proving “understanding” of this foreign art requires proof of interaction with the original locus of legitimacy. Although they do use their authority within Japan as a bolster to credibility, the rock critics mainly use connections to overseas: (a) direct importation of foreign records (b) travel abroad (c) fraternization with foreign musicians (d) solicitation fromh the foreign media.

By the late 1990s, the Japanese pop culture world had ballooned to an amazing size and had enough local heroes that young bands could find inspiration solely from Japanese talent. Ironically, YMO’s success helped weaken the inferiority complex that drove snobs to always look abroad. YMO and Snakeman Show, however, were of the generation who still saw the ultimate cool as being a link to overseas — or perhaps, they wanted to parody this widely-held attitude as a tired cliché of Japan’s cultural elite.

3) Any reference to UHF dates the material rather nicely.

Posted in Humor, Music, Subculture, The Past 11 Comments »