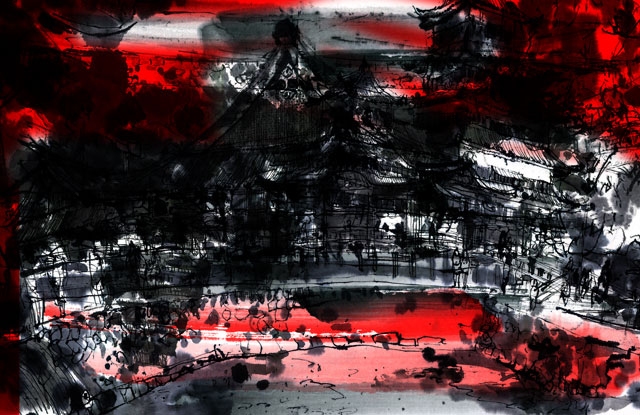 The title story is the winner: a novella that could be translated as “The Lime Pothos Boat.” This title (despite sounding like something Angel Investigations might have fought in Season 2) combines two of the key motifs in the book: a lime pothos plant the narrator has growing in her garden and a Papuan outrigger canoe she sees in a travel poster.

The protagonist — rarity of rarities, an Akutagawa Prize-winner written in the third person — is a thirtyish woman named Nagase. She’s working four jobs, all of them low-paying and part-time, taken after quitting a corporate career due to harassment from her boss. Neither the details of this harassment nor the trauma it inflicted on her are ever quite spelled out, but it still affects Nagase several years later when the book begins, and not just because the event ruined her chances to make it as a career woman. In fact, we come to suspect that she works four jobs not just to make ends meet, but also because she’s made herself a workaholic, trying to escape the thoughts that come to her when she’s idle.

This idea puts the story into the stream of recent Prize-winners examining the lives of women in the workplace (see Aoyama Nanae, Itoyama Akiko, even, in a way, Kawakami Mieko and Daidō Tamaki). But it goes in a different direction from those stories, partly in that the book is not entirely focused on the protagonist Nagase.

One of the things Tsumura gains by breaking away from the first-person fixation of most A-Prize bait is the chance to create more than one actual character. The story is seen through Nagase’s eyes, but we get to know several of the women around her, including her mother, three of her college friends, and one of her coworkers. The result is a sort of composite portrait of two generations of women living in the age of divorce and more-or-less full female participation in the economy.

They show a diversity of experiences when it comes to love life. Nagase and her college friend are single. Nagase’s mother is divorced, and another of her college friends separates from her husband in the course of the story. A coworker is contemplating divorce. The third friend stays silent, but is clearly feeling trapped as a full-time homemaker. Everybody but the last-mentioned is working. But Nagase is really working.

We follow Nagase for a whole year. As the story starts she sees the aforementioned travel poster — an advertisement for an around-the-world cruise that catches her imagination. She works out that it would cost the equivalent of a year’s wages from one of her jobs, so she decides to save those earnings and live on what she makes from the other three. If she can save the money in a year, she’ll take the voyage, she tells herself, although it’s likely that the trip itself is less important than the idea of having something to work for.

In the meantime, one of her college friends, Ritsuko, leaves her husband and brings her kindergarten-age daughter to live with Nagase and Nagase’s mother in their large Nara home. Much of the story concerns Ritsuko working through her problems, and Nagase’s mother bonding with Ritsuko and her daughter. A lot of this happens just out of Nagase’s ken, as she’s always working and is therefore somewhat shut out of the lives of the other people in her house. These sections of the novella are deftly handled, conveying Ritsuko’s situation without weakening our sense of Nagase’s work-imposed fog.

The story climaxes with Nagase collapsing from overwork, which forces her to take time off for the first time in years. We might expect that this would also force her to confront her own reasons for overworking, but she does not really dwell on the issue. She does begin to despair about saving enough for the cruise, but eventually gets a couple of lucky breaks, allowing the story to end on a note of hope. (Although we don’t find out if she actually goes on the cruise.)

What about that lime pothos? As I mentioned, this and the boat motif tie the work together — the story works on the renga logic of Kawabata as well as on the teleology of plot. The boat motif clearly comes from the travel poster and reminds us of what the narrator desires. The pothos is harder to identify. It’s an extremely hardy plant: you can clip off stems and put them in a jar of water and they’ll just keep growing. Nagase does this repeatedly, until there are pothos clippings at two of her workplaces as well as all over the house. I think this hardiness is the key: like Nagase, her mother, Ritsuko, and many of the other women in the book, the pothos can thrive without much encouragement.

They’re survivors, in other words, although that makes the story sound more clichéd, and in fact, more decisive than it is. Nagase, at the end, may or may not actually be thriving. Maybe having enough money will allow her to take that trip — but will it do her any good, if she can’t get over whatever trauma was driving her to work herself half to death?

As I wrote earlier, the story ends on a note of hope, but also on a note of irresolution — a typical strategy for Japanese Serious Literature. This, however, works in Tsumura’s case: The story captures a snapshot of its characters at a certain moment, with only bare hints of what comes before or after. These hints, however, are carefully chosen, highly suggestive, and aesthetically rich.

But “Potosuraimu no fune” significantly differs from the typical A-Prize story in other ways. The plot is more linear than most, with fewer flashbacks and far more plot events. In fact, this story offers a variety of novelistic pleasures we don’t always expect to find in Japanese fiction — vividly realized secondary characters and carefully constructed scenes — as well as pleasures we do expect to find there — delicately modulated moods and intriguingly open-ended use of poetic motifs. In fact, this the best written Akutagawa story in some years. All the way through, you feel as if you’re in the hands of a master writer of fiction, somebody who knows precisely what she’s doing.

The omake story in the volume, “Jûnigatsu no madobe 十二月の窓辺” (At the Window in December), is quite complementary. It’s about a woman named Tsugawa working in a company for a difficult boss, and how she decides to quit. There’s no formal connection with “Potosuraimu,” but we might as well be reading about how Nagase ended up where she is in that story.

Like “Potosuraimu,” “Junigatsu no madobe” is third-person, long on plot, and short on flashbacks, with several neatly suggested characters (almost all of them female). It feels very timely, given the renewed interest so-called popular culture has taken in the last few years in exploring the work environment — particularly from a female point of view and often with an eye toward revealing the bullying and abuses that take place there. Think Haken no hinkaku and Hatarakiman.

“Junigatsu no madobe” is closer to the former than the latter, with none of the suck-it-up-it’s-good-for-ya of Hatarakiman. Rather, it’s a gripping exploration of the bruised psyche of a bullied employee. What does it do to her? What does she do about it? The focus is always so tight on Tsugawa that we never get any distancing perspective. We don’t know, for example, if she’s really incompetent at her job, or if her boss is really unreasonable, or both; we only know how it makes Tsugawa feel to have to face this situation day after day. It gets claustrophobic; it gets painful. That’s the point.

As with “Potosuraimu,” Tsumura gets her point across through carefully constructed scenes and a plot that features far more suspense than you might have thought proper in junbungaku. There’s a subplot about a series of assaults taking place in the area around Tsugawa’s office, and while the story never quite turns into a mystery, the violence in the background serves nicely to enhance the depressed, desperate mood of the story.

The piece is ostensibly about women in the workplace: Tsugawa’s a would-be career woman, and her boss, the bully, is a woman too — real Devil Wears Prada stuff. But really, this story is universal, just like Haken no hinkaku and Hatarakiman. Men have to put up with their psyches being systematically crushed by the company hierarchy, too. Maybe it just takes a fresh perspective to see it.

Both stories make a strong case overall that Tsumura’s one to watch.

Sergeant Tanuki — a nom de plume — first arrived in Japan during the Uno administration and has been going back and forth between the U.S. and Japan ever since. Currently he's a graduate student studying Japanese literature at an American university. He has translated five books of Japanese popular fiction into English. He maintains a blog on art/popular culture, both Japanese and non-Japanese, at http://sgttanuki.blogspot.com/.