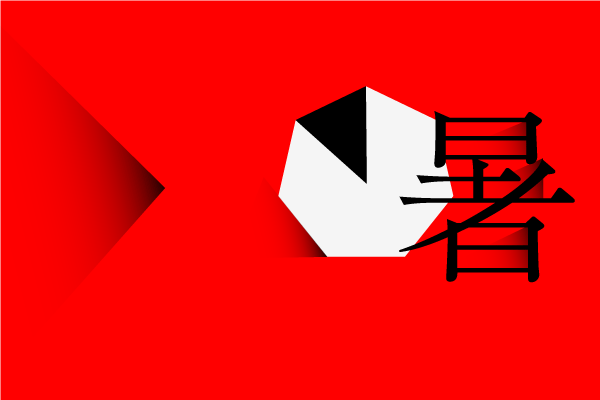 Happy New Year! What’s more exciting for 2011 than a few remaining lookbacks at 2010.

The official-as-these-things-get Kanji of the Year for 2010, unveiled on December 12 with about as much fanfare as you would expect, was 暑, “hot”. Hypothermia Hyperthermia deaths in summer and production troubles at farms and fisheries, widely interpreted as a playable demo of global warming’s effects… Chilean miners trapped underground where it’s, uh, hot… the heat of Hayabusa‘s re-entry, and the burning courage to face the future it inspired… all of these things, it seems, inspired the people’s choice.

Only five per cent of the vote was required for 暑’s victory, but this was still more than twice the percentage scored by the closest runner-up, 中, as in 中国, China, but also as in 中途半端, “half-baked, incomplete,” as in Hatoyama Yukio’s prime ministership (as one voter apparently put it).

The top 20 is pretty bleak overall: heat, nationalism, war, uncertainty… oh, and 嵐, “Arashi,” as in the boy band (although one voter graciously offered to share some glory with KARA), which made it to number 8 with 1.39%. (Since less than 300,000 votes are cast in all, any fanbase could probably put their group on top if they were sufficiently dedicated. Unfortunately for AKB48, their name contains no kanji.)

The Kanji Kentei Kabal are not the only ones who can choose a character of the year, of course. Japanese government members seized the opportunity for messaging: 行 (“go,” “perform”) from the Prime Minister, 拓 (“open,” but often in a high-level metaphorical sense, like 拓 (“open”, but often in the metaphorical sense e.g. 拓殖, “colonize”) from Chief Cabinet Secretary Sengoku Yoshito, and the surprisingly frank 滞 (“stagnate”) from Finance Minister Kaieda Banri. Meanwhile, Defence Minister Kitazawa Toshimi chose 島 (“island”), referencing in his statement the many controversies and incidents that flared up in 2010 over islands and sovereignty over them.

In the private sector, @nifty’s Word of the Year 2010 [pdf] was also 暑, but as they break their results down by prefecture one can see that, for example, Arashi have a lot of fans in Shiga, and people in Saitama are suffering. At their press conference, idol Yūki Maomi declared that her kanji of the year was 体, body, ingeniously deconcretizing the alienating metaphors of time-as-object and year-as-chapter by recentering the discourse on the individual as actualized through immediate, physical perception and expression.

In closing, allow me to announce Néojaponisme’s Kanji of the Year for 2010:

Momme. A unit of weight (and, by extension, of currency), last fixed at 3.75 grams by the Meiji government in 1891. A character born in Japan as a compressed version of 文メ, the word itself an abbreviation for ichi-mon sen no mekata (“weight of a one-mon coin”). A word used in the modern age only to quantify pearls and silk.

And now, as one of the five kanji removed from the jōyō list in 2010, a concept that schoolchildren will no longer be required even to feign familiarity with, let alone write.