VAN and the Birth of the Japanese T-shirt 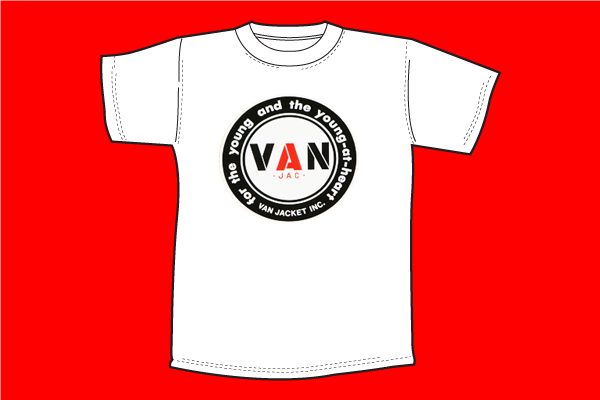 With the U.S. publication of the Japanese photo book Take Ivy

last year, the world has taken sudden interest in the Japanese lust for Ivy League style that began in the mid-1960s and stays strong to this day. And as part of that, the fashion brand wholly responsible for bringing Ivy to Japanese shores — VAN Jacket — is finally being recognized for its global role in preserving and codifying American style.

In Japan, of course, VAN’s founder Ishizu Kensuke (my longer English bio of him here) is a legendary figure — a designer, businessman, author, and fashion critic credited with importing American collegiate style, starting the radical idea of selling apparel to youth, drilling the idea of “time place and occasion” (TPO) into the collective mind of post-war Japan, and inventing several new words, including “trainer” for sweatshirt.

What many may not know, however, is that VAN was also the party responsible in Japan for making the T-shirt — once seen as little more than an embarrassing piece of underwear — into a fashion item.

In the early days of the post-war, Japan certainly had T-shirts, but they were called “meriyasu shirts” (メリヤス or 莫大小 or 目利安) — from the Portuguese word meias, which, yes, means “socks.” Meriyasu at first referred to the light-weight machine knitting technique that emphasizes the material’s ability to stretch, which is mostly used in socks and stockings. The term later, however, came to encompass all undergarments — including undershirts.

When the U.S. soldiers entered Japan en masse during the Occupation, they often wore T-shirts as outerwear much to the shock of the Japanese. But the shirts had one difference from the Japanese meriyasu: a pocket on the chest. While the American influence surely helped start idea of a “town wear” T-shirt, all fashion styles associated with the troops were generally classified under “delinquent” and only showed up in the margins of the Japanese youth population during the peak years of the Occupation. Some kids in the 1950s, however, did wear a special kind of meriyasu shirts with blue stripes out on the playground, which were called “pirate shirts” (海賊シャツ), but this was like wearing a pajama top outside and was only tolerated because they were children.

By the 1960s, however, VAN made an important step towards a “fashion T-shirt” – by first legitimizing the entire idea of youth fashion. The brand sold recreations of American Ivy League style targeted directly at (wealthy) kids, actors, and members of the burgeoning creative class. VAN mostly sold oxford-cloth button downs, blue blazers, and khaki pants — the casual of its era — but once Ishizu had established a strong consumer infrastructure, he decided in 1965 to finally bring the “brand T-shirt” to market. According to his son Shosuke, Ishizu hand-printed the first batch of logo shirts and would hand them out to friends and business partners. Ishizu’s secretary at the time Hayashida Takeyoshi (brother of Take Ivy photographer Hayashida Teruyoshi) has stated that there was much controversy in 1965 around wearing these T-shirt outdoors. Even within VAN, the staff members passionately debated the pros and cons of making these devilish T-shirts.

When VAN finally put T-shirts out to market, they specifically did two things to move the image away from meriyasu. First, they sold T-shirts with pockets like the American soldiers wore. This little detail announced to the world, “This could not possibly be underwear — it has a pocket!” The soldiers tended to wear an olive green T-shirt, and according to Ishizu Shosuke, this was the color that sold best with Japanese consumers. This was the “correct” color for wearing a piece of underwear outside.

Second, VAN put its brand logo on the other T-shirts. Despite now being mundanely ubiquitous, this act was revolutionary at the time. VAN conveniently had a nice three-letter stencil-like logo (see it here), and the brand’s young fans already wanted to put the logo on everything. Young kids would famously walk around with their stuff in old VAN shopping bags, and when they couldn’t afford to actually buy anything at VAN to get a free paper shopping bag, they would place VAN stickers on old rice bags to fake it. And many would wait outside of retail stores after VAN shipments came in just for the chance to get one of the empty cardboard boxes with the VAN logo. With that kind of passion, these kids became the perfect test audience to see if they would even wear their underwear outside if it had a VAN logo on it.

The VAN T-shirts not only became a source of income for the next ten years, but also worked as promotion for the brand. VAN did a lot of partnerships with other companies, and instead of paying the partners in cash, they would make double-branded T-shirts. This eventually caught on with other companies and became standard. In the mid-1960s, Ishizu’s secretary Hayashida noted that you could estimate how many T-shirts a company produced by sitting in front of Sony Plaza in Ginza after 6pm. If you saw one promotional T-shirt per hour, you knew they printed 10,000 shirts. If you saw two, you knew they printed 20,000.

As both laid-back hippie fashion in the late 1960s and American West Coast “heavy duty” fashion came in style during the early 1970s, the T-shirt would become an integral part of the Japanese wardrobe with almost all of the original taboo lost. In the 1990s, with the rise of both vintage fashion and Ura-Harajuku brands, the T-shirt would take on a mythic status — a garment that could be purchased for ¥5800, saved in its bag, and then sold on the reseller market for ¥30,000 a year later. You can’t sell old underwear for that much, so anyone who got rich off the T-shirt speculation market should thank the pathbreaking work of Ishizu and VAN.

Posted in Fashion, The Past 4 Comments »