On Monday, August 17, Japan lost one of its greatest post-War illustrators and animators — the inestimable Yanagihara Ryōhei (柳原良平). His creations have had a consistent presence across Japan since he created the character Uncle Torys (アンクルトリス), featured prominently in Suntory Whiskey ads in the 1950s and 1960s and revived over the past decade for a number of promotional campaigns that spurred Japan’s recent highball boom.

Uncle Torys — a diminutive, sexually promiscuous character with a penchant for hooch — appeared across innumerable pieces of print and broadcast advertising, but was most in action in “Yoshu Mame Tengoku”「洋酒まめ天国」 (“A Piece of Liquor Heaven”), Suntory’s house “style guide” for the swinging gentleman of the 1950s and 1960s. “Yoshu Mame Tengoku” featured sexploitative illustrations contained within baroque borders on the cover designs by Yanagihara as well as racy nude photography and explicit sexual illustration (with j-u-s-t the right amount of detail left out to not enrage censors) by Yokoo Tadanori and others including Yanagihara himself to illustrate the bawdy tales within. The palm-sized book-like magazines were the read at assorted bars throughout Japan during that time.

Yanagihara’s work for Suntory vaulted him into a freelance career designing innumerable book covers for assorted publishers including Kogumasha and Gakken, making record jackets for Toshiba-EMI, and creating thousands of illustrations for assorted shipping companies.

Yanagihara’s work for clients like Mitsui O.S.K. lines (with his own Yanagihara Museum web page), Sado Steam Ship Co., Ltd., Taiheiyo Ferry Co, Ltd., and Tokai Kisen Co. Ltd. perhaps fully expressed Yanagihara’s love for the sea and for marine transport. Over the years, he was awarded the title of “Honorary Captain” for each company — a first for an illustrator anywhere in the world. One can still obtain promotional products for Mitsui O.S.K. featuring illustrations by Yanagihara here.

Yanagihara worked in animation as well as illustration. He formed the three-member experimental animation and production company Animation Sannin no Kai (三人の会) with Kuri Yōji (久里洋二) and Manabe Hiroshi (真鍋博) in 1960 where they created a number of stop-motion works that were played at a screening in Sogetsu Hall in Akasaka. (You can see some examples of their work from that time on Kuri’s Facebook page here).

See more of Yanagihara’s animated work here in this playlist.

Yanagihara explored sequential art in manga form, as well—drawing the manga strip “Kyo mo Ichinichi”/今日も一日 (A Long Day Today) for the evening edition of the Yomiuri Shimbun from 1962 through 1966. 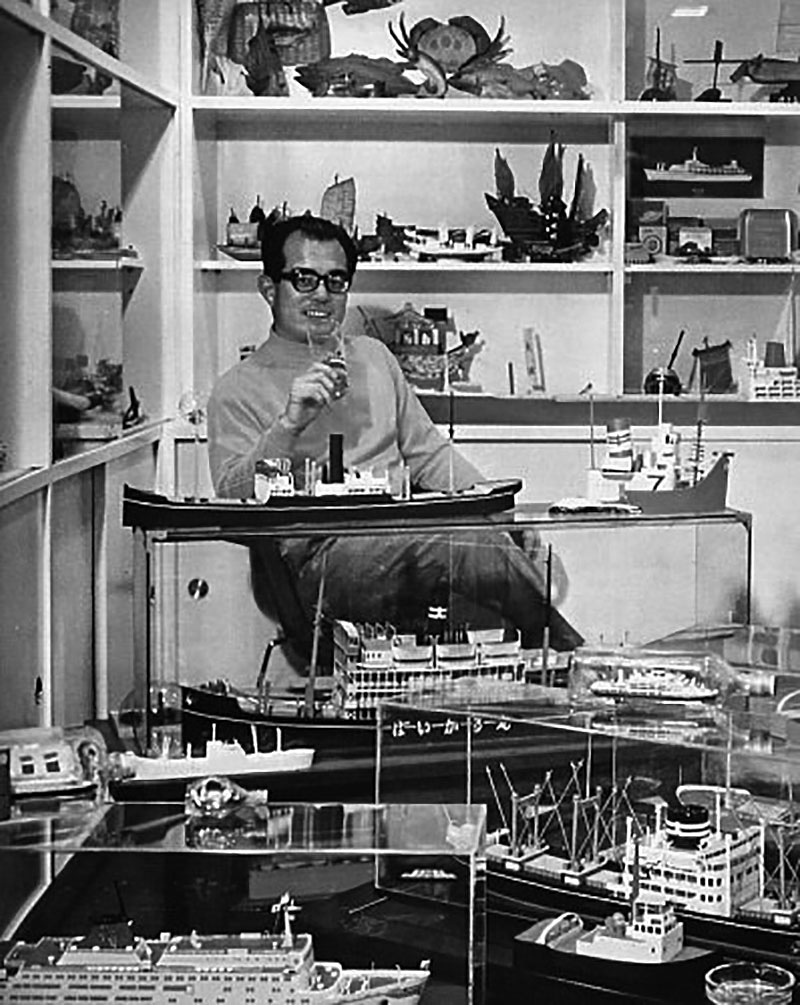 Perhaps the most iconic image that we have of Yanagihara is that of him with highball raised and surrounded by models of ships — an image of a Yokohama man happy with his work. We can only hope that he finds this kind of peace above as he did here on earth.

Posted in Illustration Comments Off on Obituary: Yanagihara Ryohei