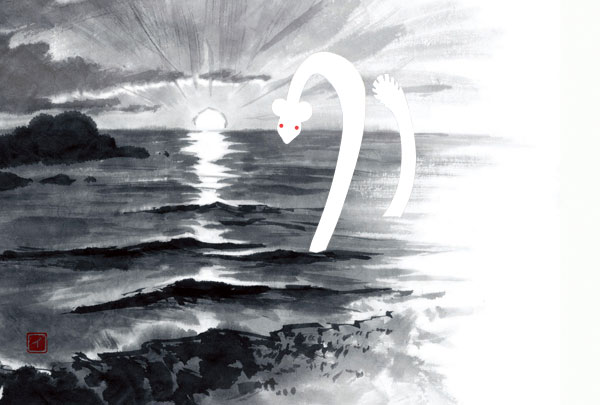 Izumi Kyōka (泉鏡花) (1873-1939) was an author and playwright whose career began in the final years of the Meiji era. He was heavily influenced by supernatural and grotesque themes from Edo-period literature and folklore. Izumi’s atmospheric and allusive technique — though not, in most cases, his humor — remains a strong influence on modern Japanese horror. This story “Night Fishing” 「夜釣」dates from 1911.

This is a story I heard from the wife of Daikatsu the Carpenter.

Daikatsu ran a crew in Ushigome-Tsukudo-Mae, and a man named Iwaji — who was married with two children — used to drop in and out, making himself mildly useful. Iwaji drank, he spent, he brawled. He had nothing you could call a hobby, except one thing: he had always loved to fish.

And he had talent to match. They say that eel-fishing is too hard for amateurs, but casting for eel was his specialty. He would step out for an evening and come back with so many eels that it was like he had been digging for earthworms in a marsh.

Nor was it rare for him to toss some eels in through Daikatsu’s kitchen door: “Boss, three twenty-six ouncers.”

His wife, though young, worried about their afterlife, and so Iwa-san’s destruction of living creatures made her terribly unhappy.

It was late November. An unseasonably muggy wind had blown all evening. Humid clouds swelled overhead. People too near a brazier were damp with sweat, wishing they could remove their coats. And now the sun was setting. Iwa-san left work and wound through the alleys of the Gyōgan temple grounds to the longhouse where he lived with his family. But once he got there, he seemed agitated by something and in a great hurry. Without even making his usual visit to the bath-house, he wolfed down his rice and tea, said that he was going to visit a friend, and left the house.

While he was gone, the wind grew ever fiercer. The doors and shoji screens rattled. The dark mouths of the shutters yawned and slammed. The skies, despite all this, were clear, stars still and twinkling even as the gale grew wild. Gray clouds like piles of cotton swelled into view from time to time, shedding a few drops of rain. But just when it seemed about to pour, the wind would grow wild and blow the skies clear.

The night wore on, and before long it had become a merciless pitch-black.

Iwaji’s wife walked to the door too many times to count. She went as far as the Gyōgan temple gate and looked up and down the road. The streets were already empty. Even when he goes fishing, she thought, he hardly ever stays out all night. Doesn’t he realize that just makes me worry more tonight?

The children, too, were uneasy in their beds, perhaps because of the unpleasant heat. They kicked off the covers, started to cry. She draped lighter clothing over them, tried to soothe them back to sleep. And so Iwaji’s wife slept not a wink all night and heard the crows call in the morning.

There was no reason to be so concerned. It was surely something to do with work, not uncommon for him. Maybe he had run into friends on the way and been invited carousing in Shinjuku with them. That would explain it all, if she could just believe it.

When he had left the previous night, she had naturally assumed that it was to go fishing. He had not smuggled his rod out with him when he left — nor his hooks, lines, or anything else — but this was because, having tired of his wife nagging him about his life-taking, he had already entrusted them to some nearby rickshaw maker or barber where he could prepare his equipment in secret before he set out. His wife was dimly aware of this.

But now he had stayed out all night and had yet to return even though it was already noon. Knowing how liable he usually was to unwise choices, his wife began to worry twice as much as another man’s might.

Now, once the floodgates were opened, this worry began to feel like a waterfall in her breast as she pulled her obi tight and quickly raked her hair up with a boxwood comb. Beginning with Daikatsu’s house, she hurried here and there, everywhere she could think of, beginning every conversation with the same urgent line: “It’s about my husband…” But her husband was nowhere to be found and nor had anyone seen him.

Eventually the sun began to set, and she had run out of ideas, just as the vendors began serving the evening’s chameshi ankake. At the bottom of Kagurazaka, near the Ushigome watchtower, was a chameshi stall whose owner she knew… and there she found her first lead, tenuous though it was.

“Iwa-san… H’m, yes, it must have been about twelve o’clock last night when he came in by himself. It had finally begun to rain. He was muttering something about, ‘It better not turn into a storm,’ and he ate two bowls while watching the sky. But it only drizzled for a little while, and when it stopped, he said, ‘That’s more like it,’ you know, and ran right out of the door. … Yes, yes, alone. None of his friends were there then. It was such a queer night, so dark and brooding. Right when he arrived, I heard them calling midnight at Mejiro, but it felt like it was already hours later — so few people outside, just the wind howling away.”

This was not much, but better than nothing, and Iwaji’s wife had not yet prepared an evening meal for her children, so she ran back up Kagurazaka to Gyōgan temple. There she found her daughter, who was almost four, and her five-year-old son standing at the door that let onto the alley, under the eaves where the starlight couldn’t reach.

As soon as she saw their faces, Iwaji’s wife smiled. “Did daddy come home?” she asked — cheerfully, gently, as if somehow this could make them answer that he had.

It did not work…

“Not yet,” her daughter agreed, almost as if sulking.

Her son tugged at her sleeve to get her attention back. “Daddy hasn’t come home, but you know what? We got an eel, like we always do.”

“A big, long fishy!” her daughter chimed in.

“Stop that! We don’t measure fish with our hands… where in the world…” The waterfall in her breast had stopped and her mouth was dry. “Go on,” she said.

“It’s in the bucket in the kitchen.”

“Who brought it here? The fishmonger?”

“We don’t know. The bucket was full and it was wiggling around inside? So we put a lid on so it couldn’t get away.”

“And we put a rock on top, mommy! A big one like a gravestone.”

“I don’t know what I’m going to do with you two.” Her voice shook as she scolded them.

“All right, all right, I’ll look. Come on, let’s go to the kitchen together.”

Hands entwined, they scampered out towards the temple gate. As they passed the graveyard in the evening lamplight, they paused and turned their darling little faces back towards her.

“If you touch it, it’ll disappear!”

With these parting words, they ran out of sight.

Standing in the dark alley, Iwaji’s wife grew cold, as if she had been seized by the legs and dragged into a hole. Her throat, her shoulders, the nape of her neck felt almost as if they would freeze.

A woman who lived next door, her light still burning, opened her shutters — perhaps she wanted to ask if Iwa-san was all right — but Iwaji’s wife heard nothing at all.

Shoulders tight, legs shaking; the kitchen door was on the left…

From just inside the screen of paper and wood, there came a flipping, splashing sound…

Perhaps her hands were numb; the door squealed and scraped. She opened it to find the sitting room and the entryway deserted — wide, empty holes, squared off gloomily side by side. Cast on the window, a shadow — what was it? The light was too dim to tell at first. Her lips grew tight… Then she knew — but how could the children have…? A pickling stone laid heavy on the barrel, something terrible about its lopsided shape, a menacing darkness suspended in the murk.

She yanked it upwards by one edge, dragging it to one side with her slender arms. Something flopped and splashed below.

She could not hear a sound.

She pushed off the lid towards the far edge to find the barrel full to the brim with water, smoothly describing a loop in which was a single eel, just one, squirming and twisting and raising its tapered head to stare at her pale face like this — or so they say.

Izumi Kyōka (泉鏡花) (1873-1939) was an author and playwright whose career began in the final years of the Meiji era, heavily influenced by supernatural and grotesque themes from Edo-period literature and folklore.

Posted in Fiction and Literature, The Past 18 Comments »