The following text originally appeared as the March 24, 2007 entry on economist Ikeda Nobuo‘s personal blog. We have published this translation without the author’s express permission, and we accept all responsibility for any issues resulting from its publication. 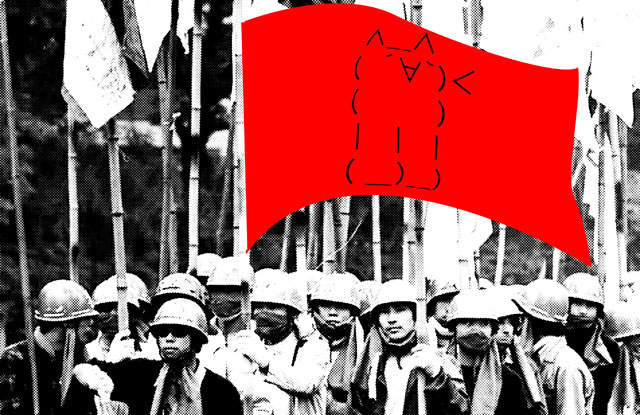 At the second session in yesterday’s symposium, we talked about the antagonism between blogs and traditional media. People often say that rhetoric on the Net is “conservative” or that there are lots of “Net Right-Wingers,” but I don’t think this is true. Mr. Sasaki and I had the same opinion: this isn’t a confrontation between “Left” and “Right” but a confrontation between generations.

If you look at the comments left on this blog about the “comfort women” issue, you’ll realize that hardly anyone is thinking about the problem from the standpoint of apologizing for the Pacific War; most everyone is ideologically naive. In the “Okutani Reiko [bashing] festival” as well, opinions were overwhelmingly criticizing social stratification (格差社会) and left-wing. So the problem at hand is not “ideology.”

What these “anonymous majorities” share is a distrust of the traditional media. For example, the traditional media is unable to level criticisms against funding for organ transplants or prosecutors’ investigations of national policy. Blogs provide an Antithese to the mainstream media’s phony self-narrative and hypocrisy of being an “Ally of Justice” that can’t manage to speak out against subjects with which they have connections.

I am part of the second post-war generation, so I was educated by teachers in the [pro-Socialist] Japan Teacher’s Union, who praised the democracy of the new constitution. It was an era where [left-leaning newspaper] Asahi Shimbun and [progressive publisher] Iwanami Shoten wielded intellectual authority. Until high-school, I believed in an anti-war/pro-peace ideology, and since that followed in the field of sociology into Marxism, I participated in things like campus protests. The more you studied Marxism, however, the more you understood that it’s pretty worthless stuff. And that resulted in the leftist ideology losing its intellectual authority throughout the ’70s.

But there was a considerable lag between the leftists’ decline on an intellectual level and the workings of the real world. Politically, Tanaka Kakuei consolidated his socialist “1970 System,” and there was support for progressive local governments (革新自治体) to redistribute economic growth through the excessive scattering of welfare money (バラマキ福祉). This Social Democratic-like system reached its heyday in the 1980s. The patriarchal “Japanese Management Style” was praised all around the world as a guiding model, but in reality, it decreased Japan’s potential growth rate (productivity).

Then at the end of the ’80s, socialism collapsed, and then the Bubble burst. Right as leftist ideology disappeared, lavish social spending also became impossible. The internet appeared in that post-socialist world, so the “establishment” to be rallied against was no longer “American imperialism” or “monopoly capital” but the hypocrisy of the media’s anti-government pose (despite its parasitic reliance on the administration for broadcast rights and kisha club access) and pro-peace/pro-equality stance.

This kind of protest is not allowed to take place openly in Japanese society, so anonymity was required. The media will not acknowledge this fact either, so they just describe the protesting voices negatively as “Net Right-Wingers” and “cruel 2Channelers.” Of course, there are negative elements in the protests, but the old “student conflicts” were little more than pure violence. The difference is that the students embraced Marxism as an ideology and as a political faction; the Net rebellion has neither an ideology nor an organization.

Young people’s means of lodging a formal objection have therefore shifted from violence in the streets to debate on the internet; and the target of their protest has moved from the government to the media. In most cases, this kind of rebellion is simply young people venting their excess energy, but there is a possibility that youth can create something new if they can skillfully channel that energy. The American counterculture of 1960 led to innovations like the internet and GNU and transformed the nation during the Clinton-Gore administration. It would be a real waste for Japan if the energy of youth is just wasted on 2ch ranting.

Ikeda Nobuo (池田信夫) is a Japanese economist, specializing in topics related to IT and the media industry. He is currently a professor at Jōbu University. Dr. Ikeda is well-known for his blog writing, as well as his books, such as 2006's 『電波利権』.