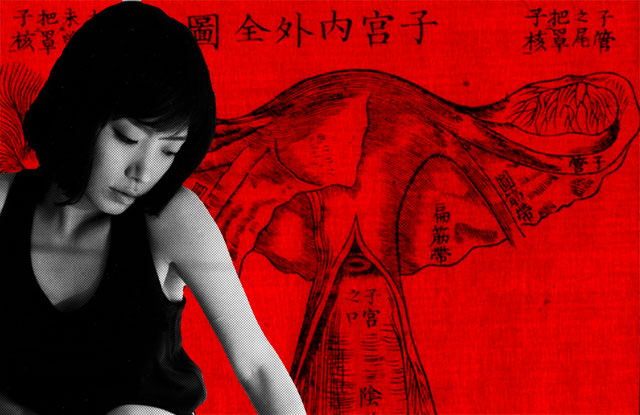 (『乳と卵』, “Breasts and Eggs”). At its core, the work is a simple story about a crisis in the relationship between Makiko, an Osaka hostess and single mother in her late thirties, and Midoriko, her 12- or 13-year-old daughter. Makiko feels that life has quite literally used her up and has decided that breast augmentation surgery is the only way to recharge her body, and therefore, her life; Midoriko is standing at the edge of puberty, terrified that it will make her life her mother’s.

Natsuko, our narrator, is Makiko’s thirty-something younger sister who lives in Tokyo. Makiko and Midoriko have come to visit for a long weekend, and she relates the events that transpire in a stream of Osaka dialect that, as Kawakami readily acknowledges in interviews, owes much to Higuchi Ichiyō‘s writing: “sights, sounds, feelings … all knitted together without any quotes or punctuation marks.” In fact, Chichi pays homage to Higuchi’s most celebrated work Takekurabe

on a number of levels. Chichi‘s character names are all borrowed from Takekurabe (except for Natsuko, who is named after Ichiyō herself), and the work relies on the same melancholy view that the end of childhood means an irreversible loss of control.

We get this view more or less directly from the young Midoriko: the novel uses short, determined essays from her notebooks that periodically interrupt Natsuko to rail against menstruation and childbirth. Self-consciously written, they stand in opposition to Natsuko’s purely verbal presence as shaman-narrator. Natsuko is generous and free-wheeling, while Midoriko is wary of committing too much of herself to anything unknown. Many of Midoriko’s essays take words themselves as their theme — the kanji etymology of shochō (初潮, “menarche“), the -shi (子, “child”) in ranshi (卵子, “ovum”). Before long we learn that Midoriko only uses writing to communicate with her mother because, she explains, talking always leads to fighting.

Midoriko and Natsuko share one main topic, of course: Makiko. Midoriko, preoccupied by her attempts to erect a coherent philosophy that can protect her from adulthood, uses her mother as a sort of anti-role model: “I love her, but I don’t want to become her”, she says. Her writing is shot through with helpless guilt over having played a part in making her mother’s life and body what they are now.

Natsuko has no such agenda, and so her Makiko is vivid and human, so clearly delineated by her words and deeds that she is by far the most believable character of the three. Midoriko is serious, almost Buddhist in her determination to break the cycle of birth. Natsuko is neutral, rarely making her opinions explicit. Makiko therefore supplies basically all of the comedy and most of the pathos that brings Chichi to Ran to life.

Kawakami’s self-imposed literary restrictions do limit the structure to a certain extent. Natsuko’s in-story narration is really just a linear chain of jo-ha-kyū, bouncing off Midoriko’s self-exposition — which is in turn immature and fragmentary by design. Even working together, these two voices don’t work up quite enough steam to drive the final climax. The denouement is plenty entertaining, but its believable aspects don’t come as a surprise, and its surprises feel a little forced. Refreshing as it is to read a work of character-based fiction that doesn’t use withheld closure as a cheap substitute for realism or depth, Kawakami goes so far in the other direction that she ends up dangerously close to a pat conclusion. (Perhaps this is a reflection of her other career as singer-songwriter?)

Still, these faults in the last few pages don’t detract from the rest of the book. You’ll laugh, you’ll cry, you’ll learn about breast augmentation surgery. Just follow Kawakami’s lead, enjoy the characters, and let the symbolism take care of itself. (Aside to non-native, non-Kansai-based readers: You really don’t need to know more Osaka dialect than you can pick up from a few hours of TV in the evening. Think Huckleberry Finn, not Trainspotting.)

Posted in Book Reviews, Fiction and Literature, The Present 3 Comments »