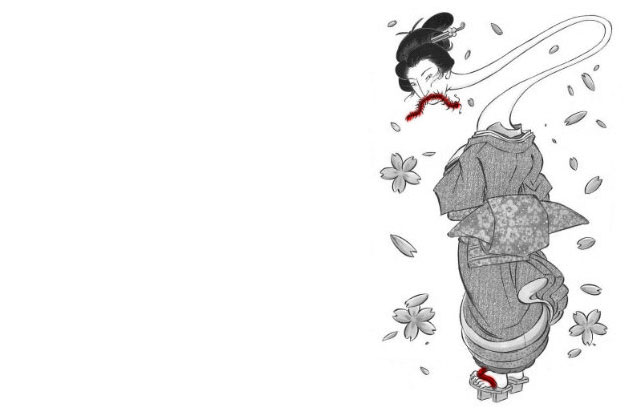 in proper context, you have to go back a few centuries. No, not all the way back to the earliest monster stories in Japan — just back to the era when people started joking about them, in the Edo period.

Edo’s appetite for entertainment was ravenous, and its unprecedented ability to pay for it fueled a veritable Cambrian explosion of popular culture. Popular teratologists found their niche quickly. Centuries of accreted supernatural lore, from cautionary tales about water and wilderness to grim moral parables inspired by Buddhism and continental culture, became the standards on which the new wave of writers and illustrators improvised — remaking old, ill-defined nightmares in crisp ukiyo-e color. Eerie spiritual histories were sold alongside pun-filled bestiaries.

By the late 1800s, though, the Meiji elite had decided that tales of the fantastic were an embarrassing atavism distracting Japan from its destiny as a modern world power. This was the po-faced environment in which Lafcadio Hearn wrote his books about Japan and its traditions, including the one that remains his most popular both here and overseas: Kwaidan

Hearn’s serene, uncluttered style and carefully pre-modern graphic elements were so influential that English-language treatments of the Japanese supernatural remained distinctly Hearnian long after Mizuki Shigeru‘s Kitarōverse had repositioned yōkai (monsters) in the Japanese popular imagination as a sort of ethnic minority — scary but generally not malicious — and certainly a crucial part of the Japanese identity, even in the modern era.

Yokai Attack! authors Yoda and Alt doff their caps to Hearn and his underappreciated wife in the dedication, but they make it clear in their introduction that they take their stylistic and structural cues from the unruly, encyclopedic Edo monster manuals that predate his work by centuries.

Yokai Attack! is your one-stop guide to understanding Japan’s traditional creepy-crawlies. Yokai are ethereal sorts of beings, nearly always encountered at night, so everyone has their own take on how they might look in real life and what sorts of characteristics they might have. This book represents an attempt to reconcile descriptions from a variety of sources, including but not limited to individual accounts of encounters, Japanese vintage woodblock prints, and microfilms of illustrated scrolls stored in the National Diet Library in Tokyo. […]

A quick word about what this book is not. It is not intended as an authoritative last word on the origins or purported behavior of these creatures. It is a collection of conventional wisdom […] concerning the Yokai — things that the average Japanese individual might know about them. Think of it as a springboard for further exploration on your own, and a leg up to understanding the many references and allusions to yōkai culture that appear in modern Japanese films, literature, and even everyday speech.

In other words, if you were baffled by the part in John Bester’s translation of Yoshiyuki’s Dark Room

where the narrator casually likens an interlocutor to “a cat that’s turned itself into a pretty young woman and been caught in the middle of the night, lapping the oil out of the night lamp,” Yokai Attack! is the book for you.*

Of course, it also stands as an enjoyable work on its own — an exemplar of the “Cool Japan” zeitgeist, as Ad Blankestijn’s review notes. Where Hearn’s Japanese ghost stories were lamplit journeys to and through strange places, Yoda and Alt offer a fluorescent-lit room full of zany ephemera more evocative of post-war, pre-Bubble kiddie pop culture than the supernatural itself: a 1970s “Robo-Umi-Bozu model kit” or a picture of “a certain mouse” relaxing with a one-eyed friend in the 1960s. The central conceit — that Yokai Attack! is a practical handbook for surviving a… yōkai attack — informs some superbly campy page design, but the uniformly cheerful, hey-you-guys writing won’t be giving anyone the creeps.

Morino Tatsuya’s full-page illustrations are equally exuberant and upbeat; even a flesh-eating monster holding a severed human limb seems somehow friendly. The most successful images are the ones where Morino has drawn the monster in question into the present day, juxtaposing it with a disgruntled salaryman or a kid in boxer shorts. On the other hand, some of the images paying direct homage to Toriyama Sekien, master monster illustrator of Edo, feel a little superfluous in the same way that Beatles covers do. (Especially when the entry includes the original Sekien image on the following page, which seems needlessly cruel as editorial decisions go.)

The downside of the “Cool Japan” approach is the prioritizaton of accessibility over accuracy. Some information is pruned so closely that it ends up erroneous, like the claim that the pronunciation “kwaidan” is “a regional dialectic variation” (technically, it is today, but when Hearn used it it was the official standard-Japanese pronunciation of the word). The centuries of audiovisual puns tangled around the word tsukumogami are ignored, although this may be because Yoda and Alt didn’t want to devote six pages to hashing it all out. And then there are the parts that are more exciting than you’d expect: dorotabō was indeed Edo slang derived from dorota o bō de utsu, but who are the unnamed but cited scholars who have revised the definition from “fuck up” to just plain “fuck”? On the technical side, the macron-free romanization feels like an unnecessary oversimplification, and the pronunciation guides are all but useless in that what they prescribe doesn’t sound like English or Japanese: “OO-mee BOH-zoo”?

We will err on blaming the publisher for this, and anyone who reads about Japan in English will already have developed a tolerance for this kind of thing in any case. Certainly it is impossible to stay mad about trivial linguistic matters at a monster manual written by two people who so obviously love the material. Yoda and Alt, like Sekien and their other Edo antecedents, make entertainment their first priority, and on that score, their work is a success.