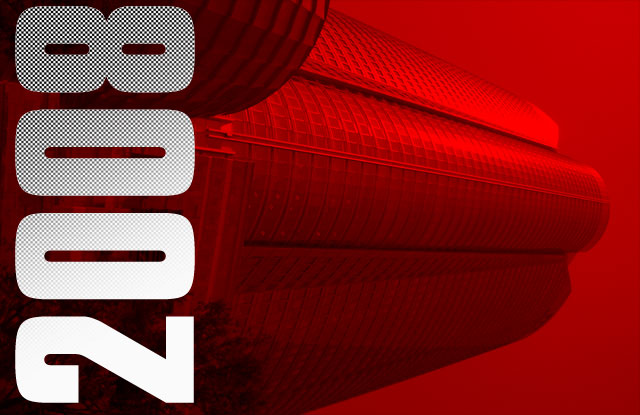 2008 marked five years since the opening of Roppongi Hills — a massive office/residential/retail complex in downtown Tokyo, completed after 17 years of planning by heavyweight developer Mori Building. Roppongi Hills became the most powerful architectural symbol of early 21st century Koizumi-era economic promises, but after a combination of scandals, bankruptcies, and high rents, its reputation has been scorched — to the point where some wonder if the entire development is cursed.

When Hills opened in 2003, the Koizumi era was in full swing. “Structural reform” and “deregulation” were buzzwords. The economy was in recovery from the IT bubble recession. And the lineup of initial tenants — including many big names in IT and finance: Lehman Brothers, Son Masayoshi’s Yahoo! Japan, Mikitani Hiroshi’s Rakuten, and Horie Takafumi’s Livedoor — promised to lead Japan in a new economic direction. Today, Lehman Brothers has experienced one of the most damaging bankruptcies in world history, and almost all the former headline tenants have left the building. What happened?

Back in the Hills heyday, no one embodied the possibilities of the new economy more than Horie Takafumi — an abrasive, unapologetically casual… okay, “slob” visionary, Tokyo University dropout, and tech entrepreneur. But he was just one of the so-called Hills-zoku (“Hills tribe”) — nouveau riche businesspeople known as risk-takers, aggressively capitalist, technology driven, casual, and lavishly rich. Horie took Livedoor, a web portal that came into being just as high-speed Internet was becoming the norm in Japan, and transformed it into a market player through a series of rapid-fire acquisitions funded by stock-split schemes and backed by pure bravado and aggressive public relations. He was quite successful at inserting himself into the public zeitgeist through his blog, books, and TV appearances, earning himself enough begrudging respect to get Livedoor accepted into business association Kedianren and run an ultimately doomed campaign for a parliamentary seat (backed by Koizumi).

He undertook brazen attempts to leverage his way into a media empire, bold moves that made many powerful enemies in Japan’s business community — notably Yomiuri Shimbun president Watanabe Tsuneo. After an unsuccessful attempt at purchasing a pro baseball team, he tried a backdoor method of entering the broadcasting industry by exploiting loopholes in after-hours stock trading regulations, although ultimately thwarted by a court decision. His critics claimed that while many of Horie’s tactics followed the letter of the law, they trampled all over the Japanese “business culture” of unstated rules and careful, back-channel negotiation. Prosecutors placed on his scent eventually arrested him under a flurry of charges, including spreading false rumors, submitting false reports, and accounting manipulation.

The January 16, 2006 raid on Horie’s residences, a symbolic message to the investment community of what would not be tolerated in modern Japan, sent the stock market into a free-fall that earned its place in history as the “Livedoor Shock.”

Horie’s fall from grace marked the beginning of a long slide for Roppongi Hills’ image. Fellow tenant Murakami Yoshiaki — head of an aggressive buyout fund that exploited the president’s contacts as a former METI bureaucrat — was arrested in 2006 for insider trading allegations stemming from a conversation held with Horie. Almost three years later, Murakami and Horie continue to live in Roppongi Hills as they fight their respective legal battles, but the perceived glamor of their locale has all but evaporated.

As Prime Minister Koizumi’s term headed to a close in late 2006, worries that Japan faced growing income disparity — fanned both by reality and the many opponents of Koizumi’s neo-liberal agenda — changed the prism in which Roppongi Hills was viewed. The office complex came to be known as a symbol of the amorality and unfairness of global capitalism and became synonymous with the negative aspects of the structural reform movement.

Heading into 2008, many of the complex’s big tenants’ five-year leases came up for renewal, and some, such as Rakuten and Livedoor, decided that the now-moot image boost from locating in Roppongi Hills no longer justified the high rent. Rakuten is now in Shinagawa, while Livedoor, forced to fundamentally rework its business after the Horie scandal, has since relocated to Kabuki-cho in Shinjuku. Another former tenant, employment agency Goodwill, suffered its own spectacular fall from glory as it became clear that it was exploiting day laborers and the boss was cavorting with lots of young idols. And with the worsening of our newest financial crisis, Lehman Brothers has become the latest casualty. The last time this author checked, tourists could be seen taking photos next to the big Lehman Brothers sign just outside Hills’ main building.

Last year, Mitsui Fudosan opened Tokyo Midtown, a similar complex just down the street from Roppongi Hills. In essence, the complex seems determined to recapture the magic of Roppongi Hills but without the troublesome controversy that comes with snuggling up to start-up companies. Along with design, media, finance, and law firms (with a good dose of foreign capital), landmark tenants at the new complex include well-respected companies that actually “make things” — such as video game/fitness equipment maker Konami and film/copier juggernaut FujiFilm-Xerox. Goodwill ended its run as a Midtown tenant, but so far the complex has not garnered a reputation for corruption. Recent additions to the Tokyo skyline include Akasaka Sacas, home to TV station TBS and Hakuhodo, while other developments planned include reworked historical landmarks such as the Tokyo Central Post Office and Kabukiza in Ginza.

But these more conservative projects are unlikely to define their age as Roppongi Hills did. Despite the supposed curse and all the invective directed toward it, Roppongi Hills exuded not just lavish wealth and self-indulgence, but ultimately, economic growth, inspiration, and hope for the future. Whether or not Horie was a fraud, the zeitgeist bubbled with the sense that a new economy was brewing and entrepreneurship could be a new path for young graduates. Even women seemed to have opportunity in this new world, as underscored by the once-stellar reputation of Horie’s PR representative Otobe Ayako. While a series of regulatory incentives aimed at spurring the long-stagnant economy have instigated a massive glut of both residential and commercial construction in this city, the endless construction of new buildings without much regard for where the tenants will come from makes me worry that the decline of Roppongi Hills may just mark the slow death of Tokyo’s last good idea.