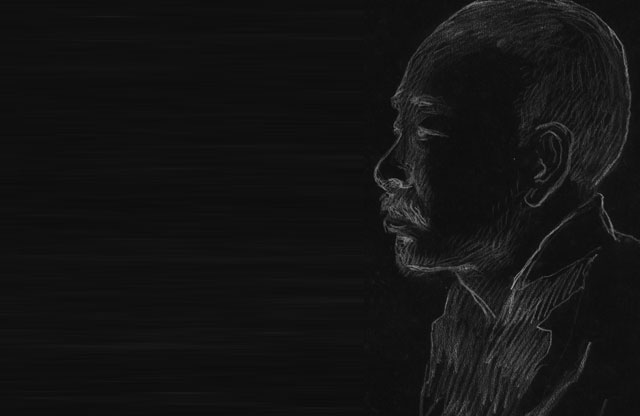 The thing about translating haiku into English is that almost none of the original haiku form survives the journey unscathed. Seventeen Japanese morae usually break down to half as many English syllables. Most editors prefer line breaks to authentic one-long-line renditions. And kireji like ya and kana have no obvious English equivalent at all.

This is awkward. Kireji are old and worn, with no particular meanings of their own, but as the links above explain they really tie the ku together. To ignore them entirely will not stand.1 But what to do with them instead?

There have been many approaches. Punctuation is popular: em dashes for mid-haiku kireji, exclamation marks for haiku-final ones, and so on. Flat denial is another option: some argue that there is no way to simulate the effect in English and no need either. Some take the middle ground, believing that line breaks/phrasing/etc. will do the job without any special attention required.

In his Shiki collection Peonies Kana, though, Harold J. Isaacson showcases a unique solution, which you may already have guessed from the title: wave the kireji through exactly as they are. Here are two typical examples of Isaacson’s work, with originals added by me for comparison:

The caged insects
all start to cry,
Fine rain kana

The coolness ya
Wind-bejumbled
rope curtain.

The book’s blurb explains that Isaacson felt that haiku had, in previous translations, been

prettified […] losing much of the power of the original. To try to rectify this he has worked long in the mountains of Shikoku to present the work of Shiki, the last great haiku master […] in its thorniness and immensity as well as its beauty; and he has transferred into English the haiku particles, left out by previous translators.

“Left out” is a provocative way to put it. I am sure that the previous (and subsequent) translators here slandered would prefer “translated.” But Isaacson makes his position quite clear in his introduction:

As it is impossible to accurately understand a haiku unless one knows whether a particle was used in it or not, and if used, which particle and where placed, it will be seen that this is the first time that Englished haiku have ever been set before the Western reader.

Of course Isaacson also recognizes the need to provide an explanation of these “haiku particles,” and does:

They are three in number, “ya,” “kana,” and “keri.” They were originally Japanese grammatical components, but are used n a special way in the haiku […] In brief they have not exactly any meaning, or rather they have the meaning that lies in themselves as sounds, and in that way are as meaningful when set in the English translation as they are in the Japanese.

Setting aside the issue of number, which is irresolvable, these claims about “meaning” are dubious at best. Ya, kana, and keri cannot be “as meaningful” in English as they are in Japanese, because they are not English.

A Japanese reader may not know the long and storied history of kana and keri, but at the very least they are known to be Japanese words often found in haiku. They are not jarring to a Japanese reader. An Anglophone reader, on the other hand, cannot but be jarred upon encountering these words. They aren’t even in the italics that signal “foreign word coming through” in modern English orthography. And knowing Japanese only aggravates the situation: the spark of recognition impedes acceptance of Isaacson’s innovations as new loanwords. (Archaic English interjections — “Lo!” “Alas!” “O!” — would arguably have gotten Isaacson much closer to the effect he claims to be seeking.)

Transliterated kireji are only a symptom of a deeper idiosyncracy in Isaacson’s technique. Consider these two examples, original asterisks included:

From the water* dropper
water is poured out to
the fukujusō*.

Year’s* Day ya
All the remembered
crests*.

To readers who don’t know the Japanese word fukujusō or at least enough Japanese to guess that -sō ending means that it’s some sort of plant, the first haiku turns entirely opaque at the most frustrating possible moment. (And shouldn’t a “keri” be in there somewhere too?)

The second one isn’t quite as obscure, but it does require that the reader be familiar enough with Japanese culture to realize that “Year’s Day” and “crests” must refer to the old tradition (now almost entirely replaced by nengajō) of paying New Year’s Day visits in formal crested kimono.

As the asterisks show, Isaacson does provide endnotes for “Year’s Day”, “crests,” and “fukujusō,” and these endnotes explain all. But for the casual reader the damage has already been done. This style of translating is almost passive-aggressive in its demands on the reader. Shiki is serious business, it says. If you want to read him, there will be homework. There is some truth in this, but it is also possible to lose sight of the forest here. In Isaacson’s own analysis, Shiki’s is a subtle œuvre, one heavily reliant on allusion. Strapping it into a hulking exoskeleton covered in blinking lights might be the only way to get it through the alien territory of English, but the effect on the reader will obviously not be the same. Isaacson’s attempts to preserve Shiki’s elegance and wit as perfectly as possible have made a Dalek of him instead.

Perversely, the ideal target audience for Peonies Kana is exactly those readers who do not need it: those who can read Shiki in the original, and appreciate Isaacson’s versions as covers produced under Oulipoic constraints. As an introduction to or universalization of Shiki, Isaacson’s book fails — but as an expression of what Shiki’s work meant to Isaacson personally, it is a glorious success. The sketches of transcendence in Isaacson’s commentary (“‘ya’ has a hard force like a concentrated bolt of out-going power, and ‘kana’ has a soft force, diffusing and thus pervading”), the attribution on the cover of the haiku within to “the Upasaka Shiki”; and the inclusion in the book of Isaacson’s translation of the Noh play Tōgan koji3 all suggest that this was the real goal of the work anyway.

Today, Isaacson probably would have just put his work online, awaiting those who had proved their worthiness by digging deeply enough in the Google results for “shiki translation” to find it. We are fortunate that he managed to find a publisher to back his idiosyncrasies back in those days before the web had lengthened literature’s tail.

1 By “haiku” throughout this post I mean “haikoid works from both before and after the word haiku was invented” in accordance with standard English usage.

2 On the other hand, one should never forget the typically farcical argument in the Kyorai shō (去来抄) between Bashō’s disciples over the master’s use of nite to end Karasaki no/ matsu wa hana yori/ oboro nite:

Some troll: Ending with nite sucks.
Kikaku: Nite is the same as kana. That’s why when the first verse in a chain ends with kana, the third shouldn’t end with nite. But using kana here would have sounded rushed, so it’s nite instead.
Romaru: I agree with Kikaku. Also, this is the third verse in a chain. Why are people thinking it’s the first?
Kyorai: This is a spontaneous expression of feeling, so it can only be the first verse in a chain. If it was the third in a chain, it would lose points for not being thoughtful enough.
Bashō: You guys are all overthinking this. I just thought it was cool that the pines were hazier than the flowers.

3 “Partly to throw more light on the character of the term Koji [the source of Isaacson’s ‘Upasaka’], but also because it makes clearer whatever Shiki was trying to do.”