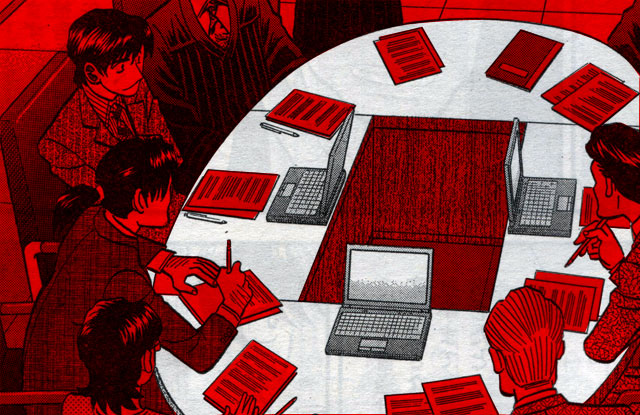 Popular entertainment tends to mirrors national anxieties. As Japan’s new “lay judge system” looms closer to its official start, manga tackling the issue have begun to proliferate. This post looks at two comics that make unease with the jury system a central theme: Saiban’in no megami and Jikiru to Haido to saiban’in.

Weekly Manga Sunday‘s Saiban’in no megami is a straight-ahead courtroom drama showcasing the new system. Yūki Miwako, the eponymous megami and ostensibly the star of this series, is one of the professional judges who have been given the responsibility of “guiding” lay judges through each trial. As I write, she is serving in the trial of Ninkawa Sumio, who stands accused by ex-lover Furukabe Aya of murdering her loan shark mother Sono (with whom he had also been romantically involved).

Sex, money, jealousy, lawyers with character, multi-layered secret agendas: Megami has the same ingredients as any foreign courtroom drama. What it does with them is quite different, however — necessarily so, because the audience’s fundamental beliefs towards trial by jury are so different.

As explored previously on Néojaponisme, many people in Japan see the jury trial system not as a valuable right ensuring that you won’t be sentenced to death unfairly, but rather an unthinkable burden under which you might have to sentence a stranger to death, never really sure whether it was fair or not. One of the primary goals of Megami is to reassure its readers, both directly and by proxy via its lay-judge characters, that the new system won’t be so bad.

Part of this reassurance is explicit: conversations in which professional judges explain legal concepts and go over evidence with lay judges; scenes showing professional judges keeping their opinions to themselves, until explicitly asked, to prevent inadvertent intimidation; even an omake feature at the end of each issue in which Yūki and her fellow judge Yamazaki (he’s a gruff-but-kind father figure) answer FAQs like “How long will trials take? Will we be allowed to go home at night?” and “Are lay judges allowed to be on friendly terms with other people involved in the trial?” 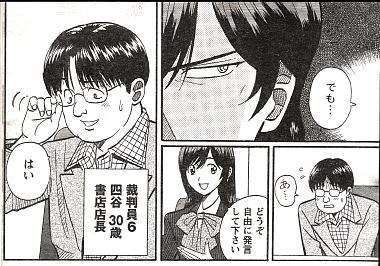 There is also an implicit component. Lay judges are shown to be all kinds of people: hot-headed moralists, reluctant introverts, empathetic philosophers… all have their place in the justice system, says Megami; that’s the whole point of lay judges. It’s true that no-one can know everything about another person — Ninkawa, for example, is concealing the fact that he killed Sono partly because she called his deceased mother a whore, but he refuses to bring this into the trial and soil what remains of his mother’s name — but if lay judges act in good faith, it’ll all work out somehow. (Case in point: Ninkawa’s biggest defender in the jury room is currently a scruffy, gentle man who saw something of his own past in the defendant during testimony.)

The big downside to this approach is that the end result feels mildly disjointed. In one chapter, the creators build up a head of steam by having yet another of Ninkawa’s ex-lovers take the stand in a short skirt and taunt a visibly furious Aya; in the next, a lay judge contemplates life on a bus ride. This may be intended to show that even in the worst-case scenario of a trial dominated by sensationalism and superficiality, lay judges will provide the good sense necessary for justice to be served… or it may just be Mōri and Kawasumi still figuring out how to implement the sizzle of U.S.-style courtroom drama into the soothing song of acceptance they seek to convey.

Jikiru to Haido to saiban’in, published in the rather less NSFW Big Comic Superior alongside such mainstream fare as the mangafication of Aibō, differs from Saiban’in no megami in many ways. Perhaps the most striking is that while Megami has a basically realistic tone, the protagonist of Jikiru to Haido has an extradimensional parasite implanted in his chest.

The twist that makes this relevant to a courtroom drama is that the parasite, Hyde, can give Jekyll direct access to the Truth. This is accomplished by taking him to a shadowy parallel dimension in which Jekyll and Hyde bargain with “ton-tons,” mysterious creatures each of which follows a single human being around for their entire life, remembering everything they see with perfect accuracy and reporting it truthfully when bribed with candy and asked the right questions. 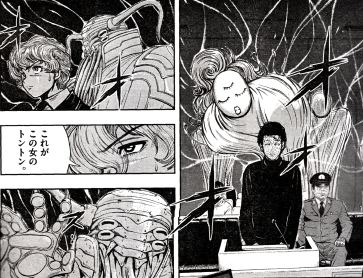 Initially delighted with this power, Jekyll soon realizes that his personal knowledge of the truth, however reliable, is useless in a court of law. And as we speak, he finds himself faced with a murder defendant who has won the sympathies of the lay judges with her tearful take of domestic abuse despite the fact that Jekyll knows that she allowed her daughter to fall to her death.

Or does he? Jikiru to Haido dallies with some rather deep questions about the nature of truth and justice. (Even its tagline brings up these issues: “Jekyll renders a judgment. Hyde knows a fact. Citizen judges give a verdict.”) Ton-tons are not, it seems, allowed to lie, but nor are they responsible for any misinterpretation of the information they provide. In this case, a particularly visual ton-ton showed Jekyll “footage” of the woman encouraging her daughter to leap from a balcony and then fail to catch her at the last minute — but it seems certain that there is more to the story, and Jekyll will learn that incomplete information can be just as reliable as accurate information. Hyde, for his part, is disgusted with our puny human law system, describing it as a farce and a game; the only human invention he respects is mathematics, where the truths are absolute and eternal.

That is to say, Jikiru to Haido has not yet taken a strong position on either side of the lay judge debate. Given the timing, it is irresistible to view Jekyll’s literally superhuman insight as a metaphor for the wisdom and experience of the professional judge, and therefore, an implicit critique of the fallibility of the lay judge. On the other hand, Jekyll himself is flawed: he asks the wrong questions, wastes valuable time, even misuses his power to stalk the woman he’s interested in. This could be read as an argument in the opposite direction, in favor of a system with enough redundancy to route around the failings of individuals rather than one which relies on a few ultra-skilled individuals to never fail at all.

As mentioned above, Jikiru to Haido and Saiban’in no megami both acknowledge the general anxiety surrounding the new system, but where Megami responds with civic-minded positivity — it’ll be fine, you’ll see! — Jikiru to Haido takes positive glee in exploring the new possibilities for bad outcomes, up to and including those involving supernatural beings creating a distributed Akashic record.

The question is, what are we witnessing? The birth of a new manga genre — the lay judge courtroom drama — and the negotiation of its mundane and fantastic boundaries? Or just the national psyche frantically working through its last-minute fears?