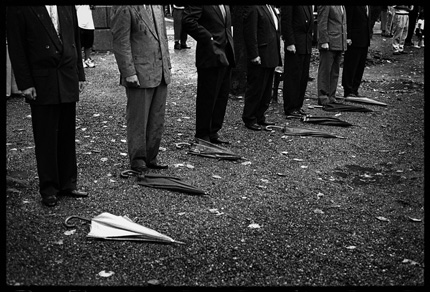 The second photo in the series is by Swiss photographer Andreas Seibert. Regarding the image, Seibert writes:

“Yasukuni Shrine, a Shinto Shrine located in Tokyo, commemorates Japan’s war dead. The Shrine itself and particularly the visits by Japanese Prime Ministers and other high politicians are a highly controversial issue, domestically and inernationally.
People stand silent to commemorate the moment when Emperor Hirohito declared the capitulation of Japan on August 15, 1945.”

For a larger image of the photograph, please click here

About Andreas Seibert:
Born 1970 in Switzerland. He studied Photography at the Zurich University of the Arts as well as German Literature and Philosophy at the Zurich University. He has been living in Tokyo since 1997. His photographic works have been published in numerous international magazines and have been on show in exhibitions around the world. He has been member of the photographers agency “Lookat Photos”. Since 2002 he has been working on a long-term photographic study about the live and work of Chinese migrant workers. This study has been published in 2008 as book by Lars Mueller Publishers. In 2009 Swiss cineaste Villi Hermann finished his documentary about Andreas Seibert, titled “From Somewhere to Nowhere – on the road in China with photographer Andreas Seibert”.