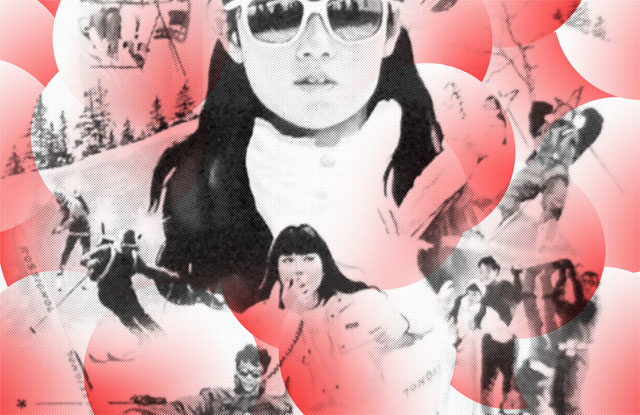 The year was 1987. Thanks to the Bubble Economy, Japan was awash with money, gadgets, and van Gogh’s “Sunflowers.” The Onyanko Club had broken up but the first Final Fantasy was still a month away. Japanese pop culture was poised, waiting to pounce on the next big fad — preferably one that involved conspicuous consumption.

』, official English title: Take Me Out to the Snowland!). The plot’s core values of love, friendship, and company loyalty converged with up-to-the-second consumerism and product placement to create an irresistible tonic for the optimistic Bubble generation. Not only did Watashi wo! kick off a mammoth ski boom that’s arguably still going strong, it’s credited with popularizing an in-flight catalog’s worth of electronics — from CB radio to waterproof cameras. The characters live in a world supersaturated with material goods, wanting for nothing. The bar scene where friends taunt the hero may appear at first to be a cliché, but when the friend’s mockery is delivered through a sampler-synthesizer he just happened to have on hand, you know that you are somewhere special.

So Watashi wo! is a wonderful time capsule — but does it still measure up as entertainment? Oh yes. Mikami Hiroshi is handsome and believable as earnest young salesman Yano Fumio, and Harada Tomoyo is in fine idol form as his romantic foil — shy, conservatively-dressed, and just incompetent enough to make Yano’s impromptu ski lessons appropriate. Mikami’s friends are rowdy in a wholesome way, and his antagonists (particularly Takenaka Naoto) are deliciously fiendish. Non-skiiers may feel that the story drags towards the end — with the tacked-on final race against time/advertisement for ski equipment — but this itself is just more enticement for audiences to become highly-involved and highly-consumptive skiiers.

One more thing about Watashi wo! that sends it into classic status: this montage of goof-off skiing tricks over Yuming‘s milquetoast-rock holiday masterpiece “Koibito ga Santa Claus.”

“When you’re an adult, you’ll understand too, one day… my lover is Santa Claus!” The words of Yuming’s “trendy o-nee-san who lived next door” ring out in shopping malls across Japan every December. If you want more insight into the curious mixture of innocence and materialistic eroticism these lyrics possess, you could do worse than to see them in context, in Watashi wo ski ni tsuretette.

Posted in Film, The Past 3 Comments »