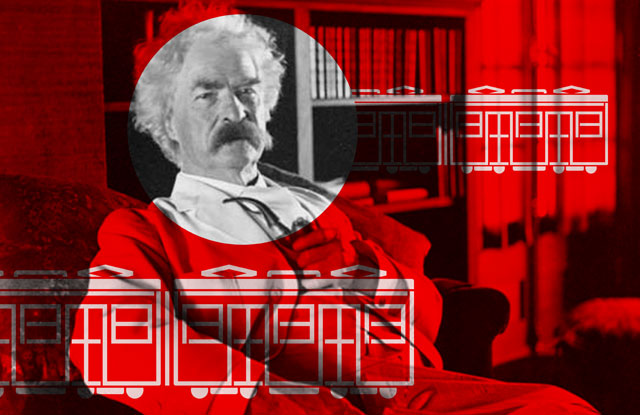 Mark Twain wrote the following about the train system of a country we all know very, very well:

All is clockwork, all is order. They make no mistakes. Every third man wears a uniform, and whether he be a marshal of the empire or a brakeman, he is ready and perfectly willing to answer all your questions with tireless politeness, ready to tell you which car to take, yea, and ready to go and put you into it to make sure that you shall not go astray. You cannot pass into the waiting room of the depot till you have secured your ticket, and you cannot pass from its only exit till the train is at its threshold to receive you. Once on board, the train will not start till your ticket has been examined — till every passenger’s ticket has been inspected. This is chiefly for your own good. If by any possibility you have managed to take the wrong train, you will be handed over to a polite official who will take you whither you belong and bestow you with many an affable bow. Your ticket will be inspected every now and then along the route, and when it is time to change cars you will know it. You are in the hands of officials who zealously study your welfare and your interest, instead of turning their talents to the invention of new methods of discommoding and snubbing you, as is very often the main employment of that exceedingly self-satisfied monarch, the railroad conductor of America.

, and the country he describes is… France. I find it very interesting how much Twain’s admiration for “order” almost perfectly echoes the modern-day adulation for the (legitimately awe-inspiring) Japanese railway system. Good trains have always apparently bred goodwill for nation states.

On the flipside, there is a parallel convention in international travel that often becomes a target for mockery. Twain writes:

Blucher’s French is bad enough, but it is not much worse than the English one finds in advertisements all over Italy every day. For instance, observe the printed card of the hotel we shall probably stop at on the shores of Lake Como:

“This hotel which the best it is in Italy and most superb, is handsome locate on the best situation of the lake, with the most splendid view near the Villas Melzy, to the King of Belgian, and Serbelloni. This hotel have recently enlarge, do offer all commodities on moderate price, at the strangers gentlemen who whish spend the seasons on the Lake Come.”

How is that, for a specimen? In the hotel is a handsome little chapel where an English clergyman is employed to preach to such of the guests of the house as hail from England and America, and this fact is also set forth in barbarous English in the same advertisement. Wouldn’t you have supposed that the adventurous linguist who framed the card would have known enough to submit it to that clergyman before he sent it to the printer?

Here Twain has found us a perfect example of 19th century “Engrish” from… Italy.

I do not wish to dwell too long on the obvious, but perhaps our modern essentialist reductions or observations about the “Japanese People” are often culled from phenomena currently prominent, but not particularly unique in the historical long-run.

Posted in Conceptions of Japan, The Past 2 Comments »