The Origin of Zoku 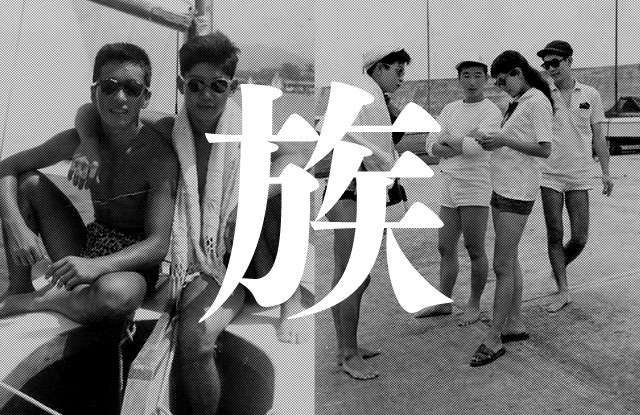 Anyone interested in the history of Japanese youth culture is already familiar with the word zoku (族). Essentially meaning “tribe,” the word has been used to mark off a certain subculture from the mainstream and other youth groups. The 1970s working-class motorcycle gangs that terrorized rural neighborhoods in kamizake jumpers were called the Boso-zoku (暴走族) — “The Reckless Tribe.” The late 1970s kung-fu dancers in Yoyogi Park became known as the Takenoko-zoku (竹の子族) — “The Bamboo Shoot Tribe,” in reference to their favorite clothing store, Boutique Takenoko (Boutique Bamboo Shoot).

Not every youth subculture has taken the zoku suffix: for example, Kogal/Kogyaru, Rollers, or the Shinjinrui (“New Breed”) of the 1980s. But the word zoku by itself has come to connote “subculture” in a generally anti-social form: zoku are not just new “consumer segments,” but wayward youth with values antithetical to mainstream society. Zoku feels like “tribe” in the sense that “good society” spied into the wilderness and discovered them in the midst of some jaw-dropping primitive behavior.1

Surprisingly, however, this sense of zoku as “subculture” only dates from the post-war. As Mabuchi Kosuke explains in his book The Post-War History of the ‘Tribes’ 『「族」たちの戦後史』

, the word fell into its usage in a somewhat roundabout way. The key lexical element for zoku’s derivation is not minzoku (民族, “ethnic group”) but the word kizoku (貴族), which means “noble” or “aristocrat.” (The word kazoku 華族 also basically means the same thing.)

When Americans abolished Japan’s feudal aristocratic titles (Baron, Prince, etc.) and took hundreds of upper class families off the government payroll immediately following the war’s end, most of these families were forced to sell their property and belongings to generate a source of income. This organized impoverishment of the upper classes was best captured by author Dazai Osamu in his 1947 book The Setting Sun

— Shayo 『斜陽』(The Setting Sun). The post-war media found his book the best descriptor of this social phenomenon and started referring to this class of fallen aristocrats as the shayo-zoku (斜陽族). In this case, zoku was meant to reflect the aristocratic zoku, not the ethnic zoku. In other words, “socioeconomic class” not “tribe.”

But just as any American political scandal takes on the suffix -gate after the original Watergate break-in, the zoku suffix became convenient to mark off all new social groups. After the shayo-zoku, there was the Achira-zoku (あちら族) — the select group of Japanese allowed to go overseas immediately after the war, when travel was still restricted. The name comes from these elite travelers’ constantly evocation in magazine and newspaper columns of what culture “over there” — achira in Japanese — is like. The next was the Oyayubi-zoku (親指族) — “The Thumb Tribe.” Interestingly, the very same term has been used in recent years to refer to today’s mobile-phone obsessed teenagers, but the Oyayubi-zoku were originally the first devotees of pachinko. The old version of the game required specific use of the thumb for shooting the balls.

During the same period, there was also the SoLa-Zoku (ソーラー族), which has an incredibly complicated derivation. Before the war, there was the Miihaa-zoku — superficial young women overly interested in popular trends and fads. To create a word for post-war women even more obsessed with pop culture than the Miihaa-zoku, the media indulged in a delicious pun: taking the two notes “So and La” on the “do-re-mi” scale that follow “me” and “fah” (ha, in Japanese.)

The Taiyo-zoku (“The Sun Tribe”) rolled around in 1956 — youth infatuated with young author Ishihara Shintaro, his book Taiyo no Kisetsu (『太陽の季節』

, “The Season of the Sun”), and his younger brother Yujiro. This time the zoku designation finally fell into the meaning “anti-social youth,” setting the modern usage. This also allowed for a pun on the original Shayo-zoku “Setting Sun Tribe” since the last two characters matched.

By the 1970s, the Boso-zoku essentially took over ownership of zoku, giving zoku mostly a working-class yankii sub-cultural bent, rather than just “youth” in general. People now refer to “the zoku” in Japanese to mean youth subcultures hostile towards the mainstream.

1 This may be irresponsible linguistic speculation, but the sound zoku in Japanese generally corresponds to words with a negative connotation. The kanjis 賊 — meaning some kind of roving criminal group, whether pirates (海賊) or bandits (山賊) — and 俗 — 風俗 (fuuzoku) meaning “custom” but now used to mean “prostitution” — are also pronounced zoku.

Posted in History, Language, Subculture, The Past 38 Comments »