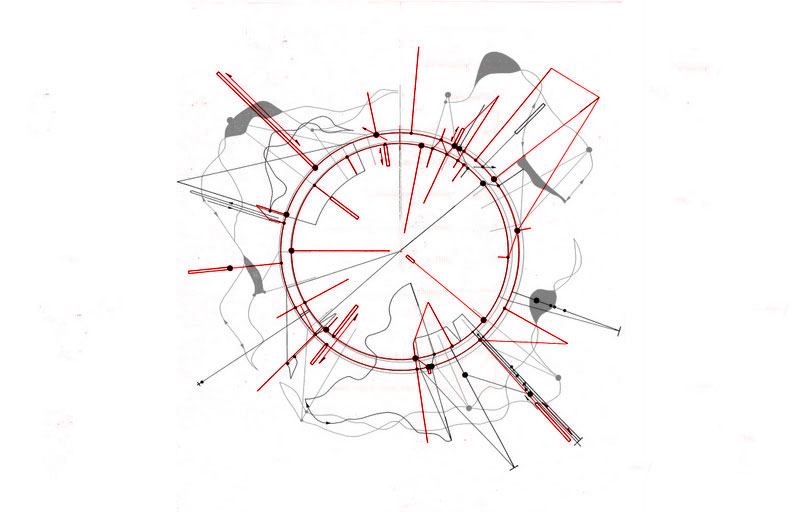 Takemitsu Tōru 武満徹 (1930-1996) was a self-taught composer of concert and film music who came to professional maturity during the 1950s’ and 1960s’ world-wide flowering of sound and art. His earliest compositions, from the late 1940s, display a strong impressionist flavor — elegiac fragments of melody and color that lingered “quietly and with a cruel reverberation” (the title of an early piano piece). His sonic curiosity blossomed after his friend and fellow composer Ichiyanagi Toshi 一柳慧 returned to Japan in 1961 after studying with John Cage, entering a period that some Takemitsu scholars call “Cage shock.”

Among the many wayward developments spawned in those fertile times, graphic scores often provoke the most wonder. Their cultural span steps outside of the traditional composer-performer role as they appear on the walls of galleries and museums for everyone to see. Musician and layman alike share an initial reaction to graphic scores and think to themselves, how in the world would anyone play that? But paradoxically, graphic scores address themselves intimately to the performer alone, who must make personal and unique decisions to realize the graphics in sound. Western art music has a long-established tradition of detailed notation for pitch, rhythm, dynamics, and phrasing so that a Debussy prelude or a Bach fugue are instantly recognizable from one performance to the next. Graphic scores dispense with all of this and approach the composition process from scratch.

Takemitsu tried out graphic scores, at first on his own and later in collaboration with designer Sugiura Kōhei 杉浦康平. He composed four works using delicate, variously ornamented circles. The first one, Ring for Flute, Guitar and Lute (1961), combines standard musical notation with ring-based improvisational interludes. The rings, one specifically for each performer, are abstract polar projections with angles, lines and points connecting the inner meridians. For his second graphic score and the first with Sugiura, Corona for Pianists, Takemitsu created ring graphics on separate sheets for five Studies: Articulation, Conversation, Expression, Intonation, and Vibration. In each graphic, there is a narrow band for the circle, and each one has its own distinctive ornamentation both inside and outside the circle. Each sheet is printed in different colors and is cut from the middle of one edge to the center of the circle, so that the sheets can be overlaid to create unique configurations for each performance. And each sheet has its own performance instructions (ironically, except Conversation, which has no instructions or annotations whatsoever) which direct the pianist to perform inside the piano and on the keyboard. The score for Corona for Pianists has been displayed in museums and is a high point of Takemitsu’s aleatoric music. 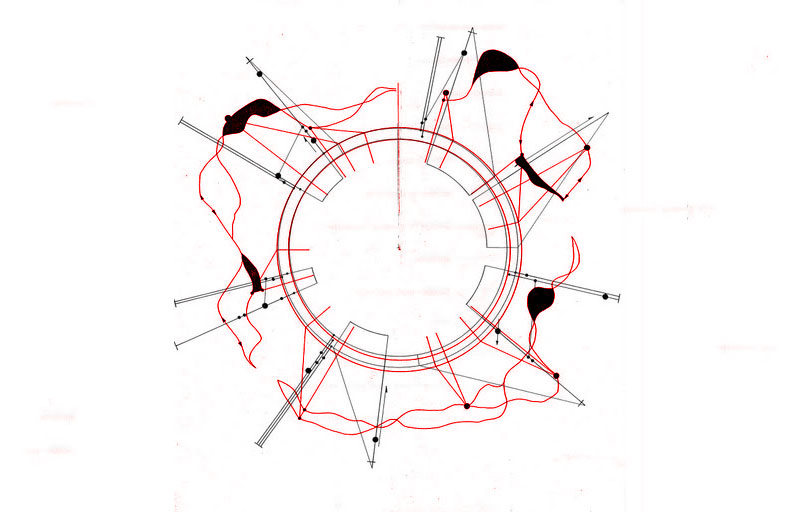 After Corona for Pianists, he also created a Corona II for a string orchestra (1962) and Arc for Strings (1963), both of which have been incorporated into other orchestral works (Coral Island for soprano and orchestra and Arc for piano and orchestra, respectively). After one additional piano work with Sugiura in 1962 (Crossing for pianists, also later incorporated into Arc), Takemitsu’s final forays into graphic scores were two percussion works from the early 1970s, Seasons and Munari by Munari, neither of which used the circle motif in any way. The remainder of Takemitsu’s music would use standard notation, and although his musical language became more traditional and expressive, he had absorbed many of Cage’s ideas about the relation of sound to silence and about the plurality and spatialization of music.

During the heyday of avantgarde recordings of the 1960s, Corona for Pianists was recorded several times for the Japanese market, but its first exposure in the west was on Roger Woodward‘s 1973 LP of Takemitsu’s piano music, where Corona — London Version takes all of side A. Woodward overdubbed four separate tracks, utilizing celeste and organ in addition to piano, and created a dramatic rendition, full of resonant gestures inside the piano and united by a short, recurring rhythmic motif, possibly from the Study for Vibration (the only page where specific pitches are identified). He introduces the organ during the decay from his signature gesture, changing the chords periodically before it settles primarily as a drone in the background, where it remains for the duration of the piece. The organ drones were most likely inspired by the different colors in the score, and the singular events to the structures and designs that pierce the circles. With few exceptions, Woodward plays inside the piano, but he made a live recording in 1990 that starts with the same rhythmic motif, but then veers into virtuosic dark runs concentrating in the low range of the keyboard but sprinkling into the upper registers as well. Accompanied by Rolf Gehlhaar on bowed cymbal, Woodward’s later rendition (which includes a simultaneous performance of Crossing for pianists) is more intense, a highly resonant cloud of sound, all the more uncanny for Gehlhaar’s metallic overtones.

Besides Woodward, no other classical artist released a recording of Corona after the 1970s, but in 2006 an extremely impressive Japan-only release paired two studio realizations by pan-experimental musician Jim O’Rourke. O’Rourke’s resumé is long and extremely diverse, and includes participation in the avant-punk group Sonic Youth’s 1999 album of compositions by John Cage, Christian Wolff, and Japanese new music pioneer Takehisa Kosugi 小杉武久, Goodbye 20th Century, which included pieces with several different score approaches, including graphics. For Corona, playing small percussion, Hammond Organ and Fender Rhodes discreetly to support all manner of sound creation strategies inside and outside the piano, he recorded and mixed the two distinct Tokyo Realizations on July 11, 2006. In some ways his approach is similar to Woodward, and one can imagine connecting their sounds to different visual elements from the score. Both artists, for example, use an organ to create a slowly evolving drone that provides the horizon for detailed, amplified sounds on the parts of the piano typically hidden away. Both get color variation using keyboards with similar timbres, the celeste and electric piano. Including two realizations on the same release is a brilliant stroke and displays the possibilities inherent in open works.

Throughout his career, Takemitsu took inspiration from myriad forms of nature. He used circular imagery elsewhere in his work, such as his first orchestral work, Music of Tree, which was composed the same year as Ring. “Trees visualise time,” he wrote, citing J.M.G. LeClézio, “since the annual rings grow regularly but with subtle irregularities in the lines.” But a corona is more than just a ring, it is a crown, a halo, the light around the sun, metaphors of height and ascension. For Gaston Bachelard (one of Takemitsu’s favorite authors), material images of flight spur the imagination in an invitation to travel, a spiritual life dominated by elevation and light. Takemitsu remained true to these ideals, as dreams, gardens and oceans joined stars and trees among his symbolic archetypes.

O’Rourke’s superb recording notwithstanding, Corona has fallen into an undeserved obscurity. Despite its publication in the early 1970s, Takemitsu’s publisher, Editions Salabert, has withdrawn it, saying that its unusual nature makes it impossible to reproduce. It’s difficult to find copies in libraries, and even then it’s often a photocopy rather than the original. Virtually all recent recordings of Takemitsu’s “Complete Piano Music” omit it, with Woodward being the sole exception. Takemitsu’s mainstream reputation increasingly targets his early impressionist pieces or his later, more tonal work, but the uncomfortable middle, where he explored the widest variety of sound and composition approaches, is shunted aside. Conservative music publishers are less willing to undertake a complex art printing that steps outside their usual engraving and manuscript reproduction. Equally conservative performance venues want to know what their audiences (and donors) will hear, but graphic scores encourage unpredictable discoveries and don’t lend themselves to static computer previews.

Graphic scores take a special kind of musician to interpret successfully, and not necessarily the kind of training available from university music programs that turn out most of our new classical performers (in many cases, conductors arrange graphic orchestral scores into conventional notation for performance). Graphic scores are a spur to the imagination, and a channeling of the creative impulse, calling for more direct participation, a singular communication between the composer and the performer. Beautiful as they are visually, the musical collaborations between Takemitsu and Sugiura remain incomplete and require a performer whose nuanced understanding of the shapes and colors will produce a unique musical realization.

Three years ago, Caleb Deupree retired from a software engineering position in Ohio and moved to Arizona, where he devotes his time to slow and spacious music of independent provenance, with occasional wanderings in the Arizona mountains. He blogs at classicaldrone.blogspot.com.

Posted in Music, The Past, Visual Art 4 Comments »