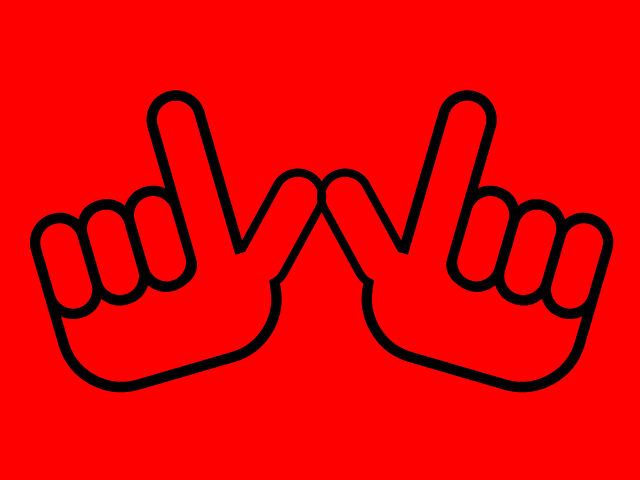 Preface: “Why do so many Japanese people make the two-finger ‘peace sign’ in photographs?” is one of the perennial What’s Up With Japan questions. Sadly, the answer given usually derives from a half-assed Google search in which most of the pages found are just quoting Wikipedia anyway.

This article attempts to summarize what is reliably known about the matter at the present time, with links to related information online where possible. Readers are invited to add any evidence of their own, including verifiable sources, in the comment thread.

A1. V-sign for “Victory” (Europe): Promoted by various Allied groups during WWII to symbolize local cognates of “victory.” Gestural V-sign made famous worldwide when adopted by Winston Churchill.

A2. V-sign for “Victory” (Japan, post-war): Churchill-style V-sign hypothesized to have been introduced into Japan by Allied occupation. Evidence scarce.

A3a. V-sign for “Victory” (Japan, pre-Bubble): Enters popular consciousness in late 1960s via baseball manga/anime Kyojin no Hoshi 『巨人の星』 (“Star of the Giants”). Hero Hyūma believes father has not come to say goodbye at train station as he departs for Kōshien, but father appears at last moment and throws up V. Hyūma recognizes it as “the V-sign of victory!” (“Shōri no V-sain!“) and resolves to win.

A3b. V-sign for “Victory” (Japan, pre-Bubble): In 1969, creators of girl’s volleyball manga Sain wa V 『サインはV』 (“V is the sign”) are inspired by A3a to drench product in V-sign — like early hip-hop producers taking only best part of drum break and repeating over and over. Sain wa V adapted into live-action drama and, like Kyojin no Hoshi, became leading hit in ongoing “sports grit” (スポーツ根性, スポ根) boom. Meaning of V-sign is spelled out in opening lines of theme song: “V, I, C, T, O, R, Y/ Sain wa V!”

I respected [Kyojin no Hoshi writer] Kajiwara Ikki. He was the sort of writer I wanted to become. The scene in Kyojin no Hoshi when Hoshi Hyūma is about to set off for Kōshien, and then his father appears and thrusts out that V-sign made a big impression. In a meeting with the editors, I suggested that we call our new story V Mexico, since the Mexico Olympics were coming up and all. After a lot of debate, we decided that Sain wa V was more straightforward and worked better. (Source: Inose Naoki 猪瀬直樹’s Mikado no kuni no kigōron 『ミカドの国の記号論』

B1. V-sign for “Peace” (USA): Exact origins unclear, but seems to date from 1960s’ U.S. counterculture, and in particular, anti-Vietnam War (= pro-peace) sentiment. Gradual dilution to symbolize solidarity in struggle against The Man as well as simple “peace.”

B2a. V-sign for “Peace” (Japan): As elements of counterculture spread to Japan, so does V-sign. Adopted by student radicals of late 1960s as well as relatively apolitical followers of foreign fashions. (Possible inspiration for A3a?)

B2b-supplement. Many sources cite Japanese popularity of Janet Lynn, U.S. figure skater and heartwarming dojikko, during and after the 1972 Sapporo Olympics as likely inspiration, claiming that she was often shown in the Japanese media flashing the peace sign. No evidence located.

D1. Timeline synthesized from information above: