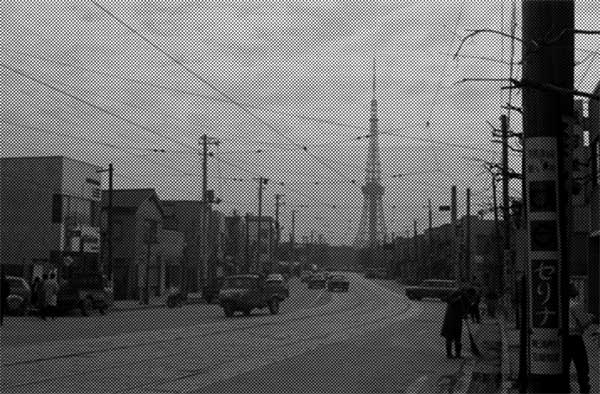 But let us forget the lamentable Roppongi of today and travel back to a brief period in the early post-war when Roppongi was the hottest neighborhood in Tokyo — thanks to some extremely wealthy young Japanese.

Tokyo’s youth culture had a rough start in the immediate days after the Second World War. First there was destruction, poverty, and mass hunger. But even when life became sustainable, youth were not a driving cultural force. Around 1950, there emerged the après-guerre tribe of boys with “regent” pompadours and aloha shirts who spent all their food money on pomade in imitation of Occupation soldiers, but they were mostly ignored as delinquent punks. And when Ishihara Shintaro’s Sun Tribe invented the “teenager” for Japanese society, they made their splash in Tokyo’s nearby beach towns rather than in the city itself. At the end of the 1950s, Japan’s largest city had yet developed a neighborhood set aside for youthful frolic. Ginza was still the forefront of cool, but intended for adult usage. In a brief moment in the very late 1950s and early 1960s, however, Roppongi took on this role as one of the first centralized locations where its mass popularity could be attributed to the presence of youth.

Before the war, Roppongi was an eerily quiet neighborhood populated by foreign embassies, bases for the Imperial army, and aristocratic mansions of the zaibatsu families. The plaintive sound of military trumpets would waft through the air in the evening. The firebombing of Tokyo, however, destroyed around 70% of the buildings in Roppongi, and after the war, the U.S. military reclaimed the Imperial bases for their own use. But this American presence created a new economy, and in just a few years, Roppongi transformed from a quiet backwater into a quiet night-life spot with an upscale American crowd. The area served officers rather than enlisted men, and this made a big difference in the level of decorum.

The neighborhood also had some of the city’s laxer entertainment laws, so establishments could stay open until dawn. Roppongi became the destination after the destination. When bars in Ginza closed up at 10pm, you could always ride over to Roppongi. And even when the Americans wrapped up the Occupation and headed back to the U.S., the neighborhood retained a distinctly foreign and cutting-edge atmosphere. Roppongi was the only place in town to get a decent hamburger or slice of pizza.

The Roppongi of this era was sprawling and incredibly dark. There were no department stores, no walls of flashing neon signs, no movie theaters, no famed landmarks. There wasn’t even a main street. You had to know where to go before you got there, because no one would be on hand to direct you. Even when the glowing-orange Tokyo Tower rose up over the area in 1958, Roppongi proper stayed completely undeveloped. Edward Seidensticker described Roppongi of this era as “the darkness at the foot of the lighthouse.” More critically, Roppongi was inaccessible by train — meaning you basically had to own a personal car or hire a taxi to get out there. By practice, this made the neighborhood an exclusive playground for Japanese with money to burn.

The mysterious atmosphere, however, was just the thing to attract young Japanese celebrities, actors, members of the film and media industries — and wealthy youth. With many TV studios built nearby, actors would finish their daily appearances and head to Roppongi watering holes to finish the day with their attractive colleagues. As for the “kids,” famed novelist Nosaka Akiyuki described those who haunted Roppongi around 1958 as “Mostly students at [elite private university] Keio, sons of corporate presidents or ex-government ministers, with about ¥300,000 a month in pocket money. Some of them owned six cars.” Needless to say, this level of “pocket money” was about 20x the standard monthly wage of a recent college graduate. Later on, almost like a post-war “Brat Pack,” young celebrities who called themselves the Yajukai — “Wild Animal Committee” — started to party in Roppongi. Soon being a part of this social group became a near prerequisite for entry into the entertainment world.

The youth congregation eventually became conspicuous to the wider society, and the media dubbed the revelers the Roppongi-zoku (六本木族) — the Roppongi Tribe. This media scrutiny promptly ended the exclusivity. When news reports of this Roppongi Tribe started to appear on TV in the early 1960s, a wave of middle-class teenagers descended on the Yajukai’s favorite watering holes, forcing the original Tribe members to abandon Roppongi for less crowded spots. The media-reading followers meanwhile treated Roppongi as a guidebook excursion: walking the very long hike from the nearest trolley stop, dancing the new dodonpa step at night club with a Filipino band, and eating exotic cuisines like spaghetti.

While this second Roppongi-zoku wave amplified the neighborhood for a few years, the entire Roppongi boom came to a complete halt in February 1962, when an angry mobster slashed the face of Yajukai member and half-Japanese singer Jerry Fujio in a bar brawl. In response to the fracas, the police moved in and purged the young set from the area’s nightlife spots. By 1963, the Roppongi Tribe boom had completely petered out. Roppongi would continue to be a mecca for dancing and adult fun, but never again lead Japan’s youth culture.

Although short-lived as a youth subculture, the Roppongi Tribe did demonstrate a few critical patterns that would become standard in the development of Japanese post-war youth culture. First, like the Sun Tribe, the original group were exclusively rich kids who abused the social freedom of their privilege. They not only possessed the spending money to pursue leisure at every turn but were able to move independently of media guidance. They didn’t follow trends — they started them. But once the ever-growing media discovered their fashion style and favorite hangouts, a rush of eager teenagers from the new middle class would follow in their steps. In response, the rich delinquents would move on to a new neighborhood. This pattern, not coincidentally, closely follows the classical model of “top-down” fashion diffusion, where middle-class imitation forces the upper-classes to perpetually move into new styles and trends.

Second, police crackdown became the common denouement to any explosion of youth culture in Japan. Law enforcement would quietly listen to neighborhood complaints about kids running amuck, but they would not immediately make arrests. They instead would wait until a high-profile incident justified a wide sweep of the area. This let subcultures thrive and cultivate for a while — before being completely dissipated and forgotten. An identical police crackdown also ended the Miyuki-zoku preppies who congregated in Ginza.

These two outside threats of mass culture and law enforcement would rain on Japanese kids’ parade throughout the post-war, but conflict can be an important cultural engine. Sick of being imitated, cutting-edge teens would think of new styles to distinguish themselves from the growing middle-class masses. And they would be forced to establish new hangouts when the police gave them too much grief. Although police was also a strong foe to youth subcultures in the United States and the United Kingdom, Japanese law enforcement kept a much keener eye on their nation’s youth for a much longer period than seen in other countries. And they would go as far as to make public statements about what was and wasn’t proper fashion. For example when Rudi Gernreich’s topless bathing suit went on sale in 1964, the Tokyo Metropolitan Police made an announcement that wearing the bathing suit “violated the law” — despite the fact that only a handful were sold in Japan (Chimura). Sure the Japanese authorities were overbearing, but this constant supervision would keep youth on their toes — always moving around and changing up their styles.

Kosuke Mabuchi. Post-War History of the “Tribes”. 『「族」たちの戦後史』Sanseido, 1989. (Most of the information in this article about the Roppongi-zoki comes from this work, pages 87-109.)

Edward Seidensticker. Tokyo Rising: The City Since the Great Earthquake

Posted in History, Subculture, The Past 6 Comments »