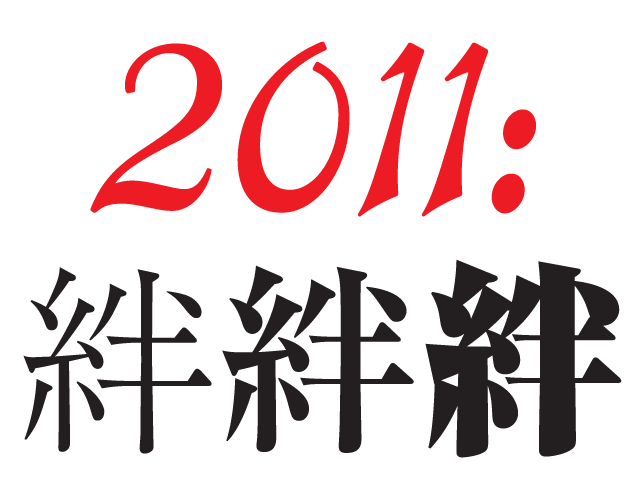 The association of the word kizuna with the Tōhoku earthquake and tsunami feels so natural now that it comes as no surprise to see 絆, the kanji spelling of kizuna, acclaimed as 2011’s kanji of the year. The negative expression of the same year-view, 災 wazawai, had less than half as many votes, so where did the association for kizuna come from, and how did it become so meaningful to so many?

One of the earliest high-profile promoters of the “kizuna” concept was Watanabe Ken and Koyama Kundō’s kizuna311 site, launched less than a week after the earthquake with an English statement introducing the word to the world:

In the past few days, the media has brought attention to the world of earthquake and devastation, much foreign press has warmly applauded our orderliness and solidarity under the catastrophic circumstances, and has encouraged us to recuperate from the calamity.

And from reading these reports, we have come to realize that we have great assets. We Japanese can take pride in our kizuna, the solidarity that binds us.

To overcome this painful catastrophe, we must find a way to unite and find our kizuna among people.

By April 11 Prime Minister Kan used “kizuna – the bonds of friendship” as the title for his letter of thanks to the international community (note that the English phrasing appears in the Japanese version of the letter) without referring to or explaining the concept in the text at all.

Simple, powerful, and easy to pronounce worldwide, the word “kizuna” became a sort of anti-brand: an explicitly inclusive and community-oriented identity open to anyone. Everything from charity drives for orphans to Nadeshiko Japan‘s World Cup victory was celebrated as an expression of “kizuna.” The word itself will no doubt fade back into obscurity in time, but, in retrospect, it may turn out to have been the banner under which another facet of Japanese identity was polished up and turned to face the world.