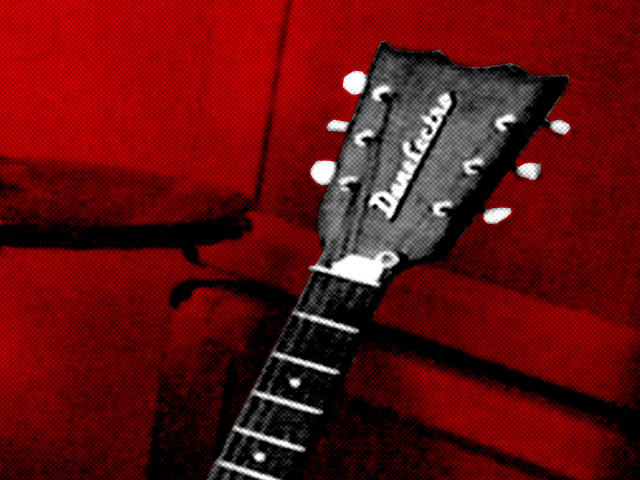 Part Three in a week-long, five part series celebrating the fifteenth anniversary of Cornelius’ musical masterpiece Fantasma. Read Part One — the introduction to the series as well as “The Age of Music Nerds” — and Part Two — a look at Oyamada Keigo before Fantasma and the structure of Fantasma as an album.

Part Three: Fantasma, Side One

On August 6, 1997 loyal Cornelius fans headed down to the local record store to pick up their pre-ordered copy of Fantasma, went home, cranked up the stereo, and got ready to be blown away by what had been promised to be Oyamada’s most epic pop concoction. They were greeted, however, with something surely unexpected — an album beginning that contains nothing approaching “music” for the first minute and ten-seconds.

1. “Mic Check”
As Fantasma opens, we are treated to a suite of binaurally recorded noises — tape machine clicks, a filtered preview of the album’s final a cappella track, a drag on a cigarette (that we all hope deep down is a joint), reverb testings on opening a can of beer and the rustling of a potato chip bag, laughing, a toy dog, and whistling the First Movement of Beethoven’s 5th. Is this rock’n’roll? To the unprepared home stereo listener, the album starts off both disorienting and slightly boring, not exactly a harbinger of what is to come. Yet this opening sequence is necessary — Oyamada is demanding that you treat the album differently, begging you to come closer. After a few frustrated listens on speakers, you soon understand the sequence only makes sense in headphones for concentrated listening. Yes, there are moments of power, but Fantasma is a trip into head space rather than a full-blast rocker to crank on the speakers or a selection of mood music. “Mic Check”’s eerily quiet opening is Oyamada’s signaling of this fact.

Once the minimal break beat and autoharp strums crash in at 1:10, however, we finally move on to the first musical moment of the album — a song which in itself is a meta-musical commentary upon the recording process. We all understand that testing microphones is a practical necessity but this procedure to gauge microphone volume input has also become a performance cliché. By making it into the first track’s sole lyric — along with “Kikoemasu ka?” (“Can you hear me?”), the one-to-four countdown, the scratched words “echo” and “reverb” (from a turntable demonstration LP owned by MoOoG Yamamoto) — Oyamada raises high the signpost that further musical deconstruction lies ahead.

The final minute of the song moves closer to being a triumphant and loud pop song, but here we go with the meta-album. Between this ode to level testing and the liner note photos of Oyamada’s immaculate, orange recording studio, Cornelius is suddenly an engineer collective rather than a pop band. He poses like Brian Wilson leaning on a mixing board rather than Brian Wilson, I dunno, singing a song at a concert. Like many other musical giants in the 1990s, Fantasma worships at the altar of the producer.

2. “The Micro Disneycal World Tour”
Like Sgt. Pepper or any great concept record, Fantasma does not really get started until its second track “The Micro Disneycal World Tour.” The title is nominally a Sean O’Hagan reference, and the song is nominally Oyamada’s attempt at a High Llamas pastiche. While High Llamas’ pre-Fantasma work Hawaii was like being stuck in an infinite loop of The Beach Boys’ unreleased “Cabinessence” demos, “The Micro Disneycal World Tour” is a much more ambitious and sprawling sound adventure. He takes a vaguely SMiLE-era palette — musical saws, spritely harpsichords, acoustic guitars brighter than the sun, and the kind of harp strums that have come to signal “flashback” in TV shows — and makes a big dreamy statement that goes eons beyond O’Hagan’s Americana preciousness.

Cornelius has a bad habit of naming songs after other people, so perhaps we should ignore the O’Hagan reference entirely: the song’s title perfectly symbolizes the ‘60s internationalist kitsch permanently etched into the Magic Kingdom that may forever embody retro-futurism. Oyamada often compared the entire Fantasma album to “It’s a Small World” — explaining his own mish-mash of genres as akin to Disney’s mixed-up layout of national cultures.

Cornelius gives the 1960s Disney sound an update with breakbeats and electronic flourishes, but the rhythm is ultimately polka music hall. Cornelius never makes any vocal efforts beyond alternating baritone and falsetto ba’s and la’s. The bridge’s slowly descending string section is perhaps the most beautiful thing on Fantasma and the greatest production achievement of Cornelius’ entire musical career. And it certainly tops anything similar by The High Llamas. On Fantasma, not only did Oyamada go deeper into obscure references than his Western peers, he ended up out-producing their actual work. When O’Hagan later remixed the song himself, he made it sound exactly like the High Llamas would have: removing the dynamics and making it ignorable mood music.

3. “New Music Machine”
As “The Micro Disneycal World Tour” tape echos into chaos, track three “New Music Machine” enters in with high-pitched feedback and a machine gun snare drum roll. Oyamada wants us to know immediately that he can do the most modern of modern rock with as much panache as he can do ‘60s soft pop. “New Music Machine” works relatively well as a pop track on its own and is one of the few truly melodic songs on the album. The lyrics — referencing the not particularly famous mid-’60s L.A. garage band The Music Machine — are about a sonic satellite launched by NASA that fell apart, a techno-pessimism to counterbalance the Disney/Jetsons outlook in previous tracks.

Fantasma’s vast panoply of instrumentation makes you think Cornelius just threw everything at the album hoping to win through sheer numbers of sounds. Yet with “New Music Machine,” he perfectly combines electronic elements like d’n’b rolls and Moog drone with rock drums and guitar noise. For 1997, this genre combination was not only shockingly new but highly prescient for the last decade. Yet as we discover in the song, the rock and electronic elements all sound almost completely identical. The future apparently will be fully electronic… and sound exactly like rock music.

4. “Clash”
In case “New Music Machine” seemed too traditional, track four “Clash” returns to defy conventional song structure. The soundscape for the verse — bossa nova beats on an old drum machine, nylon-stringed bossa nova guitar, an organ drone, strummed autoharps delayed into psychedelic peacock patterns — works as a neat sonic shorthand for the Cornelius of the era. But the chorus is a total non-sequitur, possibly the strangest in pop history: an industrial cacophony of stilted drums, dissonant vocal melodies, an abstracted Brian Wilson vocal flourish, and a single lyrical mantra.

“Clash” is not a strong song by any means, but like “Fixing a Hole” on Sgt. Pepper it works as the key filler track to recombine previous sounds into codified album themes. It is also the “slow song” after the opening barrage, although you can imagine less adventurous listeners completely abandoning their mission after having to sit through almost six minutes of unresolved vocal harmonies chanting a single word. Even the entry of an arpeggiated synth in the final verse or Oyamada’s occasional chord change can’t make things less jarring.

5. “Count Five or Six”
This tension resolves, however, as the record “skips” and we are sent into the somewhat gimmicky “Count Five or Six” — a literal piece of math rock where the robots do all the heavy lifting on the vocals. The title is again a reference to a garage band, Count Five, who had faded out of the pages of musical history. (What came first, the intense need to name every track after obscure California garage bands or the tracks themselves? Was Oyamada reading a lot of Lester Bangs at the time?) The track is brilliant, however, both as a joke on a futuristic imaginary bizarro musical world where everything is in difficult 6/8 rhythms and a call back to the Speak-and-Spell era of early computer gadgetry. The best rock is apparently the most arithmetic.

6. “Monkey” (aka “Magoo Opening”)
The previous song ends in a field of guitar distortion, which, with the help of shortwave radio noise and Moog blurps, bleeds naturally into the next track “Monkey.” On the Matador release, the song is re-titled “Magoo Opening,” since they had to clear the rights to the samples by counting the track as a cover rather than an independent work. Almost the entire song comes from Dennis Farnon’s wacky opening theme on the 1957 LP Mr. Magoo in Hi-Fi.

On “Monkey,” Cornelius doubles down on his Ape-obsession by bringing in faux simian calls from the 1960’s r’n’b stomper “Monkey” by J.C. Davis and voice samples about “An escape from the Planet of the Apes” from what I assume is a spinoff storybook record from that film. For only being about 1.5 minutes of music, this track could be considered the quintessential Shibuya-kei moment — mixing super fast kitschy American TV instrumentals from the 1950s and 1960s with 1990s dance beats. In this case, the song gets its spritely fun from the Magoo soundtrack and David Seville’s “Gotta Get to Your House” and then adds gabba-like drum fills, tough-as-nails jungle breaks, distorted 909 kicks. Although Cornelius seems particularly interested in drum ’n’ bass the entire records, the actual appearance of jungle breaks does not begin until “Monkey” (one wonders whether Cornelius simply saw a joke in placing his “monkey” within a “jungle.”) The end result is high-energy cartoony frenzy and one of the most enduring timbres of the record.

7. “Star Fruits Surf Rider”
The chaos subsides into the bossa nova pattern on an ancient Maestro drum machine and organ drone bliss of lead single “Star Fruits Surf Rider.” At this point in Fantasma, Cornelius starts to limit the sonic palette, returning to previously introduced sounds and references rather than swirling out into an infinite cornucopia. The cheap drum box and drone come from “Clash,” the intense drum ’n’ bass chorus from “Monkey,” the dreamy breakdowns from “Microdisneycal World Tour.” There are a few new tricks, including deteriorating tape delays that turn into extreme stereo pulses. Certainly viewed as an indie rock track, “Star Fruits Surf Rider” was heavily innovative at the time, taking the Pixies/Nirvana quiet-loud dynamics and re-imagining them with a completely different world of instrumentation. And as the end of Side One — an imaginary boundary for the digital age — the track rewards the listener with a hummable and powerful crescendo.

Despite the drone-y melody, Cornelius is able to make “Star Fruits” the central pillar of the album. He later re-emphasized the importance of this particular track by making it the lead single and releasing a two-vinyl record version (“Blue” and “Green”) that could be played together on two turntables in a mock-quadraphonic manner.

Next time: Fantasma, Side Two