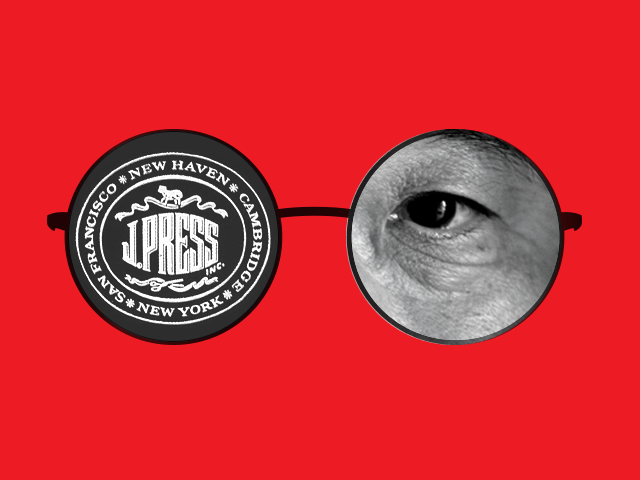 In 1974, Tokyo-based apparel giant Onward Kashiyama licensed the traditional American gentleman’s brand J. Press for the Japanese market. In the U.S., J. Press was well-known as a campus retailer for the Ivy League and its graduates on Madison Avenue, but in Japan, Onward took the brand to the masses, opening J. Press corners in dozens of department stores across the country. Upon its entry to Japan, the brand quickly became a favorite of Baby Boomers who had grown up on Ivy League style in the mid-1960s and still wanted to wear tweeds, oxford-cloth button down shirts, and khaki pants as adults. J. Press did well in Japan, and in 1986, right smack in the Bubble Economy, Onward bought the American company outright.

In the late 1970s and early 1980s, Onward spent massive sums on advertising J. Press in the print media. The classic ad format, often seen on the back cover of lifestyle magazine Popeye, showed a Japanese or American man telling a colorful story about their favorite trad clothing item. In 1985, as Japanese pop culture went in more avant-garde directions, Onward came up with a new idea — asking up-and-coming novelist Murakami Haruki to write a very short story inside each month’s advertisement for magazines Popeye, Box, and Men’s Club.

At this point, Murakami was working as a full-time writer, having abandoned his Sendagaya jazz bar four years earlier. He enjoyed a respectable readership but had yet to achieve the society-wide fame he would with Norwegian Wood from September 1987. In 1985, he was best known for his unique tendency to include elements of magic realism in his fiction and for his many references to Western pop culture — the Beach Boys, Kant, Nikos Kazantzakis’ The Last Temptation of Christ, Miles Davis, and in many instances, American fashion. As Sam Anderson of the New York Times noted about Murakami’s debut Hear the Wind Sing, “In just 130 pages, the book manages to reference a thorough cross-section of Western culture: ‘Lassie,’ ‘The Mickey Mouse Club,’ ‘Cat on a Hot Tin Roof,’ ‘California Girls,’ Beethoven’s Third Piano Concerto, the French director Roger Vadim, Bob Dylan, Marvin Gaye, Elvis Presley, the cartoon bird Woodstock, Sam Peckinpah and Peter, Paul and Mary. That’s just a partial list, and the book contains (at least in its English translation) not a single reference to a work of Japanese art in any medium.” Drawing on this vast knowledge of imported consumer products and media, Murakami also wrote movie reviews and essays for magazines such as Men’s Club, Brutus, and marie claire Japon.

Onward approached Murakami about the J. Press ads through writer, editor, and legendary game designer Itoi Shigesato. According to Murakami’s afterword in Yoru no Kumozaru (『夜のくもざる』

), the collected edition of the works, he was given license to write whatever he wanted. “Just have fun with it,” Itoi told him. So once a month from April 1985 to February 1987, Murakami wrote a “short short” (短い短編), which was set on its own page with an illustration by famed artist Anzai Mizumaru at the top and a small J. Press logo in the lower left corner.

The J. Press Stories (translations are by Morales unless otherwise noted):

The stories are light, fun, and at times, absurd. In “Eel,” a woman named Kasahara May (a name readers may recognize from The Wind-up Bird Chronicle) calls the narrator in the middle of the night to ask for his help getting rid of ants. Having been woken from a pleasant dream, the narrator is angry to eventually learn that she has dialed the wrong number. Even within such a short work, Murakami is able to address his major themes and images: miscommunication, telephones, unfulfilled desires, and strange young women. For the most part, the stories are very funny: In “Julio Iglesias,” the only thing that will ward off a giant sea turtle is Julio Iglesias’ painful rendition of “Begin the Beguine.”

The stories can also be read as a precursor to the recently popular “flash fiction” or “nano-fiction” genres. As is the case with many stories in this style, Murakami uses striking first lines to provoke reader interest. “Antithesis” begins, “I finally received a postcard from my uncle who we hadn’t heard a word from ever since he went off antithesis hunting in Borneo last September.”

Murakami made no attempt to plug J. Press products in the stories, nor does he talk about “traditional” America. The works read as vignettes he would have likely written anyway. Yet Murakami still fit perfectly within the J. Press milieu: He grew up on Ivy League apparel as a Baby Boomer, wrote the occasional essay for trad bible Men’s Club, and used clothing as an integral way to illustrate modern Tokyo in his fiction. For example, at the end of his 1985 novel Hard-boiled Wonderland and the End of the World

, the narrator discovers that he has a day left to live and decides to go to a famous American clothier to get spiffed up before a date. Alfred Birnbaum’s English translation of the novel reads:

I took the subway to Ginza and bought a new set of clothes at Paul Stuart, paying the bill with American Express. I looked at myself in the mirror. Not bad. The combination of the navy blazer with burnt orange shirt did smack of yuppie ad exec, but better that than troglodyte. (342)

Birnbaum’s rendering of the passage glosses over the more detailed descriptions Murakami used in the Japanese original. Here is a translation of the full passage:

First, I took the train to Ginza and bought a shirt, a tie, and a blazer at Paul Stuart, paying for it with my American Express. I put it all on and looked at myself in the mirror. Not bad. I was a little worried that the center creases in my olive chinos had started to fade, but I guess not everything had to be perfect. And the combination of the navy blue flannel blazer and burnt orange shirt did make me look a little like a young employee at an advertising firm. But at least I didn’t look like someone who’d just been crawling around in the sewer and only had 21 hours left before he disappeared from the world.

With this discerning eye on Western fashion, Murakami would have likely been very happy to do ads for J. Press. He was already drawing from classic American brands to aestheticize his fiction and provide a curated lifestyle for readers.

Meanwhile Onward chose Murakami as a way to demonstrate the brand’s own taste. Onward’s J. Press was a Japanese version of American classics — just like Murakami, who often sounded like Japan’s answer to Kurt Vonnegut, Raymond Chandler, and Raymond Carver. In the last two decades, Murakami has tried to mature beyond being a “stylish” writer by delving into deeper, darker topics, but he was certainly a seamless fit with the broader consumer culture in the mid-1980s.

In 1987, Murakami became a celebrity when Norwegian Wood sold 3.5 million copies in just over a year [1]. He had always been free to write what he wanted — so much so that he took off to Europe for three years where he wrote Norwegian Wood and a few of the J. Press short shorts — but now he could afford to be very choosy with his projects.

Despite this newfound fame, Murakami returned to the “short short” exercise six years after J. Press, wanting a “change of pace” from longer works. He schemed with Anzai to find a new sponsor who would let them do another series. They eventually received support from Parker fountain pens and got on their way. This next batch of short shorts appeared from April 1993 to March 1995 in Parker ads inside glossy magazine Taiyō.

The titles alone make it clear that Murakami was aiming to match the spirit of the original series.

This time, the stories were included in the magazine’s index as integral texts, elevated beyond mere ad copy. They also came with the series title “Murakami Asahidō” (Murakami’s House of the Rising Sun) — a general title translator Jay Rubin has noted that Murakami used for lighter works he wrote alongside major novels [2].

As much as Murakami marks off these advertorial short shorts, a tension between art and commerce remains. We can best understand this odd intersection of literature and advertising in two ways. First, these stories are a literary expression of the more general nationwide obsession with foreign fashion and culture seen in magazines Men’s Club, Popeye, and Brutus. Second, they are a clear example of the accelerating complexity of mid-1980s Japanese pop culture — when shopping malls like Seibu and PARCO used post-modern philosophers, conceptual artists, and oblique copy to sell product to ever more sophisticated masses. Murakami was embraced by the same frenzied mass audience that made Asada Akira’s Structure and Power an improbable best seller.

Murakami played with this zeitgeist in the actual works. In “Structuralism” from the Parker pen series, the narrator writes to an unnamed recipient, “Don’t ask me anything about structuralism either. There is nothing I can tell you about structuralism.” This may be as concise a summary of Murakami’s work as there ever has been: While Murakami offers up pop culture references, he is at the same time distancing himself from the selections of others.

In the midst of endless Nobel speculation, Murakami’s literary legacy continues to be debated and refined. Readers remain sharply divided between seeing Murakami’s work as intelligent pop fiction or important national treasure. His advertorial short stories offer support for both positions: They can be taken as further evidence of his comfort within the marketplace, or as an artist locating a new creative space deep inside the pop culture sphere. What is beyond doubt is that Murakami achieved complete separation from the tortured jun-bungaku “pure literature” writers who preceded him. His career has been very much his own.

FOOTNOTES
[1] Rubin, Jay. Haruki Murakami and the Music of Words

Posted in Fiction and Literature, Markets and Consumers, Media 2 Comments »