The Japanese Diet vs. Popteen 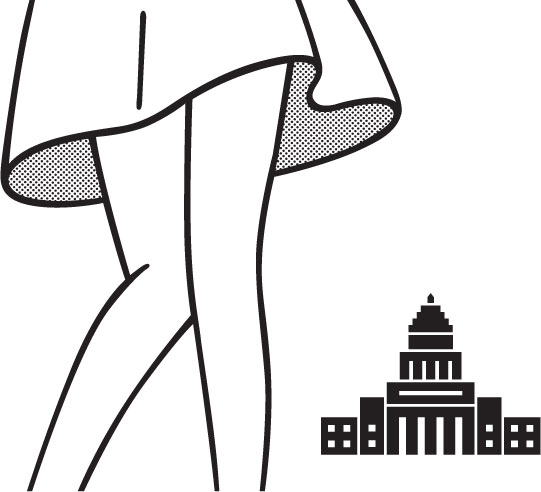 On January 2, 1983, the Japanese Diet called upon the Japanese Magazine Publishers Association’s Ethics Committee Chairman for a frank chat about the conspicuous increase of sexual content in young women’s magazines. In particular legislators were concerned about Gal’s Life (Shufu no Tomosha), Kids (Gakushu Kenkyusha), Elle Teen (Kindai Eigasha), Popteen (Asuka Shinsha), Carrot Gals (Heiwa Shuppan), and Maru Maru Gals (Toen Shobo). These were relatively popular titles at the time, with Gal’s Life selling a half-million copies a month and Popteen right behind it at 350K.

The publishing industry did little in response, and so in February 1984, Mitsuzuka Hiroshi, the Deputy Chairman of the Liberal Democratic Party’s Policy Research Council, spoke out in the middle of the Lower House Budget Committee, complaining about the plague of explicit sexual articles in girls’ magazines, which he called “instructional classes on sex.” Mitsuzuka took the struggle from the Diet floor to the media, appearing on TV shows to further indict the publishers. Prime Minister Nakasone also weighed in: “There’s a worry that the sexual depictions in certain magazines for young women may lead to crime” and then hinted that he would be open to legislative or otherwise administrative action against the publishers.

Results were swift. The day after Mitsuzuka’s Diet speech, publishers Heiwa Shuppan and Gakushu Kenkyusha announced they would discontinue Carrot Gals and Kids, respectively. Gakushu Kenkyusha was in a particular bind as it had a huge business in another highly regulated field: educational text books. Popteen meanwhile pledged a new editorial direction. Gal’s Life changed its name to Gal’s City to escape the increasing social stigma and took out all the dirty articles. This was apparently not what readers wanted, however: Sales dropped so violently that Shufu no Tomosha put the title out to pasture one year later.

What was this sexual content that the Liberal Democratic Party were so concerned about? Essayist Sakai Junko remembers Gal’s Life as chock full of “juicy stories that covered the rawer parts of girls’ lifestyle.” Gal’s Life provided a stark contrast to Magazine House’s olive — a title that imagined all Japanese teenagers wanted to imitate the “good sense and elegance of Parisian lycéenne.” While digging through old issues of Gal’s Life, Sakai discovers these article headlines:

There are few images of Gal’s Life available online, and this cover from 1980 has much less controversial headlines (although it does sport the amusing promise “You won’t be an ugly girl (busu) if you read Gal’s Life!”) The general sense, however, is that the magazines had a constant stream of salacious articles for young women on sexual topics, all blanketed in a general atmosphere of “documentary” reporting.

(The Social History of Debut Magazine Issues), sociologist Namba Koji mentions a few articles in Gal’s Life such as “Gal Sex Report”, “Document: Love with a Man who Has a Wife and Children”, and “Comparison of Sex from Girls All Across Japan.” He then makes the obvious but crucial point that these are exactly the kind of articles one can expect from men’s magazines.

Framed this way, it is hard to understand the LDP’s crusade against “gal” magazines in the 1980s as anything other than patriarchal sexual hypocrisy. The issue is not “sexual content” itself in the market but who is partaking. As we all know, Japan does not have traditionally puritan attitudes towards sex, and conservatives had traditionally been the staunch advocates of legalized prostitution (against a coalition of women’s groups, socialists, and Christians who worked to outlaw it.) While the 1980s LDP may have been mostly removed from those particular 1950s battles, Mitsuzuka and company did seem bothered with idea that young women — maybe even from good families! — were speaking frankly about sexual experiences and trading tips.

To the LDP’s credit, 1984 was also the year the police started to crack down on an explosion of new sexual services. And perhaps the LDP was most concerned that these magazines explicitly targeted minors and intentionally or unintentionally worked to normalize sexual experiences outside of middle-class social expectations — dating married men, getting eloped, having abortions, working in the sex industry.

Most likely, however, is that the LDP were confused by a different principle all together: the rise of working-class yankii narratives in popular culture. Titles like Popteen and Gal’s Life were not intended for the ojōsama princesses of CanCam or the demure aesthetes of olive. In fact, these magazines built huge audiences by ignoring the slightly imagined, internationalized consumer world of good taste. Instead they spoke to the “real” lives of lower class yankii girls. While the data is not presently on hand, we can assume that working class teens in Japan — who have tended to marry at younger ages, are less busy with schoolwork, cram schools, and extracurriculars, and have less parental supervision — had more sexual experience than their Tokyo upper crust peers. This at least is the message that yankii women have tried to create for themselves in their own media. Starting with these 1980s magazines and carrying all the way to egg and Koakuma Ageha, there have been more explicit sexual articles in yankii/gyaru magazines rather than “good girl” magazines like an•an, non•no, With, or More. And moreover, the most salacious part of the magazine was often the “reader’s column” — where girls told endless and exaggerated sob stories of rapes, bullying, sexual promiscuity, dead boyfriends, and abortions. (I remember reading an issue of egg in 1999, right in the peak of the ganguro movement, that offered a guide to “How to Have Sex in a Car” as well as a particularly graphic reader about group sex in the ocean that involved sea shells.)

Without much perspective on these class-clustered sexual mores though, one can understand elitist politicians seeing gal magazines lined up equally on a bookstore rack with those proffering middle-class consumerist values, easily falling into the hands of a girl who would otherwise read about Chanel suits and marrying guys from Todai. She would be ruined forever! This is almost the virgin-whore complex grafted onto government policy. Interestingly, however, one of the main readerships for the controversial gal magazines was likely normal middle-class girls who liked to giggle at the sex stories and make fun of the yankii narratives. Nakasone and Mitsuzuka may have not known that these titles also inspired mockery from the very girls they hoped to protect.

In the end, only Popteen survived the 1984 gal magazine massacre. The editors promised to clean up the content but then slowly brought back articles about sex techniques and teenage delinquent life when the Diet had moved on to other problems and scandals. It may have also helped that society went through a “sex boom” right after the Diet hearing. Akimoto Yasushi’s mass idol group Onyanko Club was suddenly on TV every afternoon singing about how “being a virgin is boring” and how high school girls needed to have sex with their math teacher to get good grades.

In the mid-1990s, however, Popteen eventually dropped the delinquent lifestyle stories and became a pure style bible for the kogyaru army. This may have ironically been key to the magazine’s longevity. Whether advertiser pressure or consumer demand, there seems to be less desire these days for Japanese magazines to do anything other than provide excessive product details on the latest clothing. Even when Koakuma Ageha takes up frank talk about domestic violence and hostess lifestyles, the idea is dealing with harsh realities rather than sensationalizing for girls who want to fantasize about adult activities.

Yet there appears to be latent demand in Japan for female-oriented stories of sexual exploits and tragedies, as evidenced by the rise of the keitai novel — which writer Hayamizu Kenro has linked directly to the “confessional” narratives of yankii ladies biker mag Teen’s Road. The Diet may have temporarily killed off the teenage delinquent narrative industry but they could not stifle all the curiosity.

Bonus trivia: When Mitsuzuka held up Popteen in the Diet, the page was open to an illustration by now famed media critic Miura Jun.

Posted in History, Love, Sex, and Gender, Media, Politics, Subculture, The Past 4 Comments »